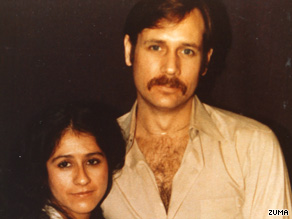 Phillip Garrido and his wife in 1988, shortly after his release from jail for rape.

"There have been some misstatements made in the media, and possibly very innocent misstatements like, you know, 'She's charged with 29 counts, she was there, therefore she must be culpable,' " Gilbert Maines told CNN's "American Morning" on Wednesday.

"That's good speculation, but any good prosecutor will tell you that they can't prosecute and convict on speculation.

"The media can do that, but the prosecutor can't."

Nancy and Phillip Garrido have been charged in connection with the kidnapping and rape of Dugard, 29, who police say was abducted by the Garridos in 1991 at age 11. Dugard grew up in a backyard compound of tents and outbuildings, and gave birth to two daughters, now 11 and 15, fathered by Garrido during her captivity, police said.

The Garridos were arrested last week and have pleaded not guilty. Philip Garrido is a registered sex offender.

Maines said his client has been charged with "about half" of the 29 counts against the couple. He said he has discussed "what she says happened." He would not elaborate, citing attorney-client privilege. But, he added, he is still "trying to establish a line of communication" with his client.

Maines said he was not aware of the case before he was appointed by the court to represent Nancy Garrido.

"I'm sure you understand that this is a horrendous thing for her," Maines said. "I mean I realize it's horrendous for Jaycee and her parents and the children, but my concern right now is that my client get a fair trial."

He said that he is still working on getting his client to "confide in me and talk to me so I can formulate any defense that is available."