(CNN) -- Phillip Garrido had a story to tell -- about how God helped him overcome the evil inside him. 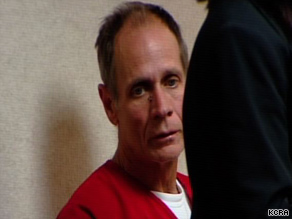 The campus at the University of California at Berkeley was his pulpit, and he hoped his neighbors and customers of his printing business would become his flock.

He wanted to share his story with anyone who would listen, including law enforcement.

Just days before he was arrested and an 18-year-old kidnap mystery was solved, Garrido walked into an FBI office in San Francisco, California, with a stack of documents.

The purported writings were a two-part manifesto. First he discussed the "Origin of schizophrenia revealed." Some who know him say Garrido spoke of having schizophrenia and attention deficit disorder.

In the second part of the documents, Garrido detailed his struggle with sexual urges, in writings he titled "Stepping into the light."

In the documents, obtained by CNN, Garrido confessed his past aggressive sexual impulses, but said he is no longer that man.

Garrido and his wife were charged last week with crimes relating to the abduction of 11-year-old Jaycee Lee Dugard in 1991 and her captivity in a hidden shed-and-tent compound in the couple's backyard in Antioch, California. They pleaded not guilty to charges of rape, kidnapping and false imprisonment.

After his arrest, Garrido said documents he gave to the FBI would be key, that they would help people understand who he really was. He told a local television reporter the documents would show a "heartwarming story," one that helped him "completely" turn his life around. KCRA: Read transcript of Garrido's interview after his arrest

The documents provide a glimpse into the mind of a man who said he thinks he has a God-given gift. The power to control minds with sound was his salvation, he said, and would help others before they committed violence.

He wrote that he wanted to share his story to provide "solid hope for everyone who suffers from the many forms of aggressive sexual behavior as well as other problematic behaviors."

In his writings, he detailed how hard it was for him to control himself. Garrido wrote that he realized he couldn't control his impulses and they were plaguing the ones he loved.

"Certain behaviors cause a great deal of pain in myself and those who are victimized by those behaviors, especially our family and my wife," he wrote.

That pain made him try to change from the predator he had become, he wrote.

He said he began forcing himself to look at attractive women, but would not allow himself to act.

"See how beautiful she is to look at," he would tell himself.

In time, Garrido wrote, he began to stop physically acting on his feelings.

He wrote that he became free and able to experience sexual enjoyment for the first time with his wife, though it was unclear whether he was referring to Nancy, his legal wife, or to Dugard, the mother of two of his children.

He claimed he realized how wrong he had been in the past.

"I realized I never needed to act or do the things I used to believe was so great and stimulating," Garrido wrote, referring to what he called "one of the most powerful freedoms imaginable."

"I began to weep telling her 'I am so sorry for the things I did in the past,' " Garrido wrote about his wife, adding that he experienced a feeling of remorse he never had before.

That feeling of salvation was something Garrido believed was a gift. He said he thought it meant it was up to him to help other sexual predators turn their lives around.

"It will begin to open a new pathway for us all. God willing, I will be teaching this and other skills Christ is providing for me in the prisons throughout the U.S. as well as overseas," he wrote.