ANTIOCH, California (CNN) -- Customers of the printing company knew her as "Allissa." 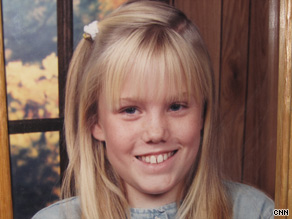 Jaycee Dugard was kidnapped at 11 and kept hidden for 18 years in a backyard compound, authorities say.

They spoke to her about graphic design, business cards and fliers, and describe her as professional, polite and responsive.

"She was always good at getting us what we wanted," said Ben Daughdrill, who used to own a junk hauling business. "You got the feeling she was doing all the work."

But "Allissa," authorities say, was really Jaycee Dugard, kidnapped 18 years ago from her home in South Lake Tahoe, California.

Her identity was discovered earlier this week and her alleged kidnappers -- 58-year-old Phillip Garrido, a registered sex offender, and his 55-year-old wife Nancy -- were arrested.

They face 29 felony charges, including rape and kidnapping, and both have pleaded not guilty.

Authorities said the Garridos held Dugard -- and the two daughters she had by Phillip Garrido -- in sheds in their backyard.

Garrido's business, "Printing for Less," catered to small businesses. He ran it out of his home in Antioch, east of San Francisco. His customers say he did good work and had much lower prices than competition.

CNN obtained e-mails written by "Allissa" to Daughdrill. The e-mails came from a Yahoo account set up by Phillip Garrido and in his name, but Daughdrill said they came from "Allissa" because the two were either on the phone or had just finished a conversation when they arrived. In them, Dugard uses short, compact answers and lowercase letters. The e-mails also have a typo or two.

"i will take a look at the price sheet and send you over a copy of the revised brochure tomorrow," she wrote in an e-mail written on May 7, 2007. "as to the pictures sorry ... but we don't have a digital camera ... hopefully you can find a way to get me those pictures you want so i can add them to them brochure. i can get the brochures to you pretty fast within the week of final approval of the brochures. How many are you going to order and do you want them on glossy or matte paper, thick or thin?"

In another e-mail, this one from January 21, 2008, Dugard wrote, "heres the business cards in jpeg format let me know if you need anything else thank you."

While authorities say they are still trying to sort out the conditions in which Dugard was held captive, it's clear she was an integral part of Garrido's business.

Watch about recovering from captivity »

Daughdrill told CNN he met Dugard in person on two occasions. "Nothing stood out," he said when "Allissa" emerged from the house and gave him his print orders.

"Obviously there was some brainwashing going on. That's all I can think," he said. " She had access to a phone and a computer, so obviously something went on that no one knows about."

Three northern California law enforcement agencies have joined the investigation of Phillip Garrido, saying he may be responsible for other crimes.