NEW YORK (CNN) -- The foster father of a missing California boy with cerebral palsy says he left the child alone near his car before the child vanished five days ago from a shoe store parking lot. 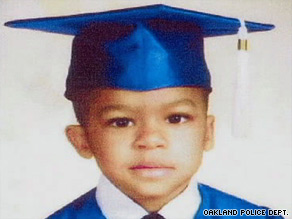 Hasanni Campbell was last seen wearing shorts and white braces on his ankles because of his cerebral palsy.

Louis Ross told HLN's Nancy Grace that he left 5-year-old Hasanni Campbell outside his BMW for two to five minutes Monday afternoon. Ross said he went to the front door of the store to ask his fiancee, Jennifer Campbell, who works there, to open the back door.

Police in Oakland, California, and the FBI are searching for Hasanni and investigating his disappearance.

Ross said he voluntarily took a polygraph test, whose results have not been disclosed.

Campbell declined to take one because she is pregnant, he said.

According to Ross, Campbell routinely took care of Hasanni and his 19-month-old sister while Ross attended medical assistant classes twice a week in Fremont.

"They would stay in the back room and play with each other until she got off work, and they would all come home together, and I would see them at 9:30, 10 at night, when I got home from class," Ross said.

Asked what flashed through his mind at the time, Ross said, "Initially, it didn't hit me. He's probably standing around there. ... When Hasanni gets frustrated, he freezes.

"So I thought he would still be on the side. And we all thought -- even Jennifer thought he was probably just hiding and joking around."

Ross said he and Campbell -- who is the sister of Hasanni's mother -- took the boy and his sister into their home because their biological parents are unable to take care of them.

Hasanni, 3 feet tall and weighing 30 pounds, was wearing shorts and white braces on his ankles because of his cerebral palsy, a debilitating brain disease that inhibits motor skills.

Anyone with information is asked to call the Oakland Police Department at 510-238-3641.