(CNN) -- The man who shot three women dead in a Pennsylvania gym before killing himself this week posted at least two videos on YouTube last year, apparently referring to a desire for a girlfriend in both. 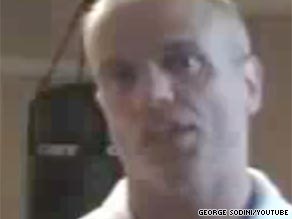 George Sodini addresses the camera in his basement in one of his YouTube videos.

George Sodini, 48, gave a tour of his house in one clip, his camera briefly panning across a book called "Date Young Women" in his living room.

"The couch and chairs, they match. The woman will really be impressed," he says just before showing the book.

In the bedroom, he says, "It looks pretty clean. I'm sure she'll be impressed."

It is not clear whether he is speaking about a particular person.

He speaks directly to the camera in the second video, posted four months later.

"It is easy for me to hide from my emotions for one more day," he says, speaking to a mirror in his basement.

"Take a long drive in a car, listen to some music, daydream or just do some mundane task around the house that really doesn't need to be done that's not too important. And there you go, one more day, and one more day turns into one more year."

Watch some of the shooter's videos »

Sodini walked into a gym aerobics class and began shooting about 8 p.m. Tuesday, killing three women and wounding nine others before turning the gun on himself.

He "just had a lot of hatred in him," Allegheny County police superintendent Charles Moffatt said Wednesday.

He brought four handguns into the LA Fitness gym outside Pittsburgh and used three of them, firing at least 36 times, Moffatt said.

Those killed were identified by the county's medical examiner as Heidi Overmier, 46, of Carnegie, Pennsylvania; Elizabeth Gannon, 49, of Pittsburgh; and Jody Billingsley, 38, of Mount Lebanon.

Authorities think Sodini targeted the aerobics class specifically, as a schedule was found in his home with that class circled, Moffatt said. But police do not believe that he targeted anyone personally. Rather, because of an online diary he left, as well as notes at the scene and at his home, they think he was targeting women in general.

He makes similar complaints in his blog, which also documents his growing rage at women for their rejection of him and at the world he felt had abandoned him.

Sodini, a member of the gym, was found dead in the aerobics room of the gym, lying on top of one of his guns about 7 feet from one of the victims.

He had worked as a systems analyst in the finance department of K&L Gates, a law firm with an office in Pittsburgh, since 1999, said Mike Rick, a spokesman for the firm. Neighbors described him as reclusive and said he had stopped talking to them in the past few years.

Sodini apparently had "practice runs" before the shooting Tuesday, Moffatt said. Someone at the gym had showed him how to shut off the lights, he said, not knowing of his plans.

"He was hell bent on committing this act," Moffatt said.

Three of the four guns found with Sodini were traced back to him, and authorities are in the process of tracing the fourth, Moffatt said. They were two 9 mm semiautomatics, a .45-caliber revolver and a .38 in his pocket. Sodini also had 30-round ammunition clips that were illegal before the assault weapons ban was lifted in 2004, police said.

On Tuesday, Sodini visited the gym three times: the first about 11 a.m., a second time at 7:40 p.m. and a third time at 7:56 p.m., Moffatt said. Members of the gym are required to swipe a card to check in but do not have to check out, he said.

However, police know that Sodini made a telephone call at 7:45 p.m. and think he may have left the gym to make it. Authorities are attempting to find the person he contacted, Moffatt said.

Witnesses said he was dressed in black when he entered the class, shut off the lights, walked about 10 feet and began shooting.

Mary Primis, 26, an aerobics instructor who is pregnant, was shot twice.

"I remember thinking I wanted to hold my breath because I was afraid, if he saw that I was breathing, he would shoot again," she told CNN affiliate WPXI from her hospital bed. Asked whether she thought she was going to die, she said, "I wasn't sure."

Her husband, Alex Primis, told WPXI that she was shot once in the left shoulder and again through the back of her shoulder blade.

Police seized Sodini's car for processing; no guns were found in it, he said. They also seized his computer and were examining it.

Moffatt said he believed that none of the shooting victims who remained hospitalized Wednesday had life-threatening wounds.

Police spoke to a pastor mentioned on Sodini's online diary. The man said that Sodini had attended his church but stopped in 2006 and that there was a minor incident involving a woman who felt "he was paying too much attention to her," Moffatt said. The pastor spoke to Sodini, and it stopped, he said.

Moffatt said police have no knowledge of any mental health issues involving Sodini but are still puzzled at the violence.