About 150 birds seized in fighting investigation 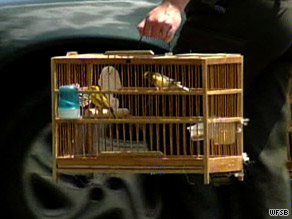 In addition to the 150 birds -- mainly saffron finches -- police seized their cages and $8,000 in cash from a home in Shelton, said police Sgt. Robert Kozlowsky.

The 19 people, all originally from Brazil, are being charged with animal cruelty and illegal gambling, Kozlowsky said. The homeowner, Jurames Goulart, 42, was additionally charged with interfering with officers.

Shelton Police say they've never seen or heard of this kind of bird fighting before.

"This is new to us," Kozlowsky told CNN. "Finches are much easier to keep under the radar than roosters because they make less noise and they wouldn't arouse suspicions if someone had a lot of them."

Watch police haul away the birds »

Kozlowsky said police obtained a search warrant after a monthlong investigation and raided the home after receiving tips that an illegal fight was scheduled to take place.

Wayne Kasacek of the Connecticut Department of Agriculture, which helped remove the birds, said that at least four of the finches have eye injuries.

All About Animal Cruelty • Gambling