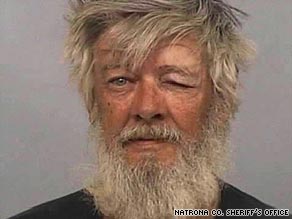 Edward Eugene Harper is believed to have lived a nomadic lifestyle since fleeing Mississippi.

Harper, 63, is accused of molesting two girls, ages 3 and 8, in his neighborhood in Hernando, Mississippi, more than a decade ago, the FBI said.

The FBI said it received a telephone tip in June at the Denver office regarding Harper, and brought a SWAT team and a hostage negotiation team to apprehend him in rural Wyoming on Thursday.

He surrendered without incident, the FBI said, and later admitted his identity to agents.

Harper was living in a 1979 truck with a camper top in the southern portion of Washakie County's Big Horn Mountains, the FBI said.

He is believed to have lived a nomadic lifestyle, moving from place to place and earning a living by doing odd jobs and herding sheep, the FBI said in a statement.

He failed to appear for a scheduled court hearing and a state warrant was issued for his arrest in October 1994. He was later charged with unlawful flight to avoid prosecution, a federal offense. The FBI added him to its 10 Most Wanted Fugitives list last year.

Before living in Mississippi, Harper had been a ranch hand, working with cattle and sheep in Montana and Wyoming, the FBI said in its release on Harper last year. He has also worked as a truck driver, the agency said.

According to the FBI, Harper subscribed to "sovereign citizen" ideology and claimed to be a member of the Montana Freemen, a group that rejected the authority of the U.S. government. The group became famous for an 81-day standoff with federal agents in Montana in 1996.

But after the arrest and conviction of many of its members, the group essentially disintegrated, according to Mark Potok of the Southern Poverty Law Center.

"As far as I know," they don't exist, he said. "Most of them went to prison and there was nothing left."

All About Federal Bureau of Investigation • Sexual Offenses • Mississippi • Wyoming