(CNN) -- The private forensic pathologist who conducted an autopsy on Drew Peterson's third wife affirmed the official findings that ruled the death a homicide, a copy of the autopsy report shows. 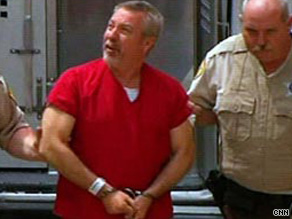 Drew Peterson, a former police sergeant from Bolingbrook, Illinois, is charged with killing his ex-wife.

The report, obtained by CNN legal analyst Lisa Bloom, was written by noted pathologist Dr. Michael Baden. He conducted a third autopsy on the body of Kathleen Savio at the request of Savio's family in November 2007.

Peterson, a former Bolingbrook, Illinois, police sergeant, pleaded not guilty May 22 to a charge of first-degree murder in Savio's 2004 death.

The initial autopsy report concluded that she died as the result of an accidental drowning.

Savio was found in the bathtub in her home with a bloody gash on the back of her head; at the time she and Peterson were going through a bitter divorce.

But investigators took another look at the case after Peterson was named as a suspect in the October 28, 2007, disappearance of his fourth wife, Stacy Peterson.

Baden's report cited Blum's findings of a 1-inch blunt-force laceration on the back of her head, five scraping abrasions and six blunt-force black-and-blue bruises on her extremities, abdomen and buttock.

Baden also noted that even though the body was partially decomposed, "bruises and contusions caused by blunt force injuries shortly before death" were still visible on the right breast, the upper right thigh and the abdomen.

The severity of those injuries, Baden said in his report, indicated a struggle.

See a timeline of the case »

"It is my opinion, to a reasonable degree of medical certainty, that the drowning of Ms. Savio ... should be properly classified as a homicide," the pathologist concluded.

The Will County, Illinois, prosecutor announced in February 2008 that the findings of the second autopsy, conducted by Blum, provided the basis to classify the case as a homicide.

Peterson has denied any wrongdoing in the disappearance of his fourth wife, Stacy, who was 23 when she was last seen.