(CNN) -- A gunman wearing "priest clothing" sparked a shootout with police in Jersey City, New Jersey, early Thursday that ended with five officers wounded and the shooter and another suspect dead, authorities said. 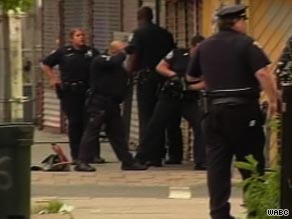 Police officers gather at the site of a shootout in Jersey City, New Jersey, on Thursday.

The shootings began around 5 a.m. as two officers monitored a vehicle suspected of being involved in a recent armed robbery.

When a man went to the car, police approached him.

The man, dressed in what Jersey City Mayor Jerramiah Healy described as "priest clothing," pulled out a shotgun and fired, grazing one officer in the leg, authorities said.

The suspect then fled to a nearby apartment, apparently with another person, Police Chief Thomas Comey told reporters at a news conference.

Police called in backup, including officers from the Port Authority, and evacuated other residents of the building. As they moved in for a tactical entry into the apartment, they were met with gunfire, officials said.

Four more officers were wounded, and the two suspects were killed in an exchange of gunfire there.

One suspect was "ready to go to war" in the way he was armed, Comey said.

"This individual came fully ready to go to war with us," the chief said at a news conference. "This is not a normal shotgun ... and he decided to put these cops under fire."

Of the five officers wounded, the two most seriously injured were in critical but stable condition Thursday night at the the Jersey City Medical Center, authorities said.

Officer Marc DiNardo, a 10-year veteran on the force, suffered two shots to the face, Comey said. Officer Michael Camacho, 25, suffered a gunshot to the neck that was considered a usually deadly wound, Comey said.

Without extraordinary efforts of emergency medical personnel at the scene, the two might not have survived, Comey said.

"It was scene you see in a war movie," police Lt. Edgar Martinez said. "We had members of the emergency service unit covering EMTs who ran into the building to save these guys. You just don't see things like that."

All About Police • Jersey City