(CNN) -- A Los Angeles-area man has been charged with murder in the death of his wife while on a cruise along the Mexican coast, an FBI spokesman told CNN sister network HLN. 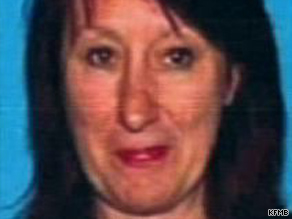 Shirley McGill, 55, was found dead on Tuesday in her cabin on the Carnival Elation.

Shirley McGill, 55, was found dead in her cabin on the Carnival Elation on Tuesday as the ship, after a five-day cruise to Cabo San Lucas, was heading back to its origination point of San Diego, California, authorities said.

Robert McGill, who is in his mid-50s, is charged with murder on the high seas, FBI Special Agent in Charge Keith Slotter told HLN.

The FBI and the Carnival cruise line said that a domestic dispute Tuesday night resulted in the woman's death, but did not elaborate on how she was killed. The FBI said the cause of death would be determined through autopsy.

Another passenger became suspicious that foul play had taken place "for a variety of possible reasons," Slotter said, and notified ship security. When security checked the couple's room, Shirley McGill was found dead inside, he said. Authorities believe she had been dead for no more than a couple of hours.

Watch Slotter describe how the body was found »

Robert McGill was arrested on board the ship and was kept in its brig for the remainder of the cruise, the FBI said. After the ship docked, he was taken into federal custody, as crimes on the high seas fall under federal jurisdiction. FBI agents boarded the ship to start the investigation as the vessel neared San Diego, with the Coast Guard transporting the agents about 10 miles offshore.

Agents were completing their work on the ship Thursday, having interviewed about 50 passengers and processed the crime scene, Slotter said.

He would not elaborate on the domestic dispute, saying authorities are still trying to piece together what happened.

The 2,052-passenger Carnival Elation had departed on the cruise July 11.

All About California • Federal Bureau of Investigation • Mexico