(CNN) -- A man suspected of fatally shooting an Iowa football coach Wednesday was released from a hospital the day before, without the knowledge of police, who had asked to be notified, authorities said. 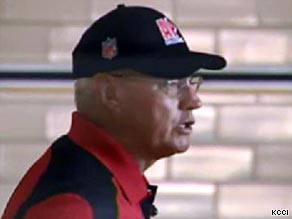 Ed Thomas had been with the school district for more than 30 years and was well-known in the region.

Investigators believe Becker walked into the school's weight room, where Thomas was overseeing athletes' weight lifting, about 7:45 a.m. Wednesday and shot him multiple times as about 20 horrified students looked on. Thomas was flown to a hospital, where he later died.

"It's just too early to speculate" on a motive for the shooting, said Kevin Winker, assistant director of the Iowa Division of Criminal Investigation.

Authorities said Becker was a former student at Aplington-Parkersburg, which is about 100 miles northeast of Des Moines, Iowa, and a former football player.

The agency, however, noted that Becker had "recent contact" with police in Cedar Falls, Iowa, about 25 miles to the east of Parkersburg. On June 20, Becker led police on a high-speed chase after he allegedly broke into a man's house, according to a division statement. He was taken into custody, but early the next morning authorities determined he needed medical attention and he was taken to a hospital. Police asked to be notified when he was released, the statement said.

But on Tuesday, Becker was released and spent the night at his parents' Parkersburg home before heading to the high school Wednesday morning, the division said. "Law enforcement was unaware that Becker had been released."

Cedar Falls police earlier said in a statement that they responded June 20 to a report of a man breaking several windows in a Cedar Falls home with a baseball bat and driving his car through a garage door. Just before officers arrived, the man fled the scene in his car and was seen leaving the area.

Becker was arrested after a pursuit that reached speeds of more than 80 mph, Cedar Falls police said. He was taken into custody by Butler County authorities and later taken to a hospital for a psychiatric evaluation, according to the statement.

"Cedar Falls police was awaiting notification that the subject was to be released from custody in order to arrest Becker and file the charges relevant to the Cedar Falls incident," according to the police statement. He faces felony charges of criminal mischief and eluding authorities, along with traffic offenses, in the Saturday incident, Cedar Falls police said.

Winker would not provide further details about why Becker was transported to the hospital.

A 911 call was received at 7:47 a.m. Wednesday regarding the high school shooting, the Division of Criminal Investigation said. Becker was located in the driveway of his parents' home, where he was arrested without incident.

Coincidentally, Becker had been released from the same hospital where his alleged victim died -- Covenant Hospital in Waterloo, Iowa.

Thomas had been with the school district since 1975 and was a regionally well-known coach, according to district Superintendent Jon Thompson.

The coach's son, Aaron Thomas, spoke briefly to reporters Wednesday, saying that his father would want to be remembered not only as a coach, teacher and father, but also for his involvement in his church, calling him "a man of deep faith who touched many lives."

"God always has a reason," he said. "At this time, it's very tough for us to understand that."

He thanked the community for an outpouring of support, recalling residents' struggle to rebuild after a deadly tornado struck the Parkersburg area last year. But he also reminded residents to have concern and compassion for Becker's family. "We ask that people pray for them as well, and that people take time to comfort and be with them," he said.

"I know that my father's legacy ... will live on," Aaron Thomas said. "Without a doubt, we're going to miss him. We will have many great memories to share and to think back upon. We were lucky to have the father we had ... I feel very fortunate to be the son of Ed Thomas."

No students were injured or threatened in Wednesday's incident, authorities said. The school was placed on lockdown immediately.

Crisis counselors were on the scene to assist students who witnessed the shooting, Thompson said.

A vigil was planned in Thomas' honor Wednesday night.