ORLANDO, Florida (CNN) -- There was no trauma visible on the "completely skeletonized" remains of slain toddler Caylee Anthony, but there were overlapping pieces of duct tape over her mouth, according to the autopsy report released Friday. 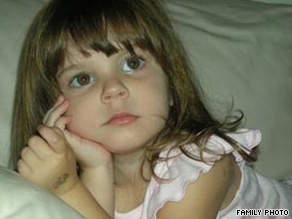 The tape was still attached to head hair, and the skull was separate from the other body parts, said Dr. Jan Garavaglia, chief medical examiner for Orange County.

"This duct tape was clearly placed prior to decomposition, keeping the mandible in place," she says in the report. Garavaglia said animals had scattered the bones after decomposition began.

The cause of the child's death is listed as "homicide by undetermined means."

Caylee Anthony's remains were found in December in woods less than a mile from her grandparents' home. Her mother, Casey Anthony, is charged with murder. She could be sentenced to death if convicted. The mother was arrested July 16, 2008, while Caylee was still missing.

Earlier Friday, a judge denied a request from the child's grandparents, George and Cindy Anthony, to keep the autopsy report from the public.

Last week, their attorney filed a motion saying the report should be sealed because its release would cause the family great anguish.

Holding back tears, George Anthony on Friday asked the judge not to release the report until Casey Anthony's trial.

"Our family's memory of precious Caylee Marie is all we have left of her," he said as his wife appeared visibly shaken.

Judge Stan Strickland said George Anthony's testimony was not lost on him, but according to the law he had no choice.

"Their pain means a great deal to me. I don't like the ruling I'm making, but it's one that I legally have to make," he said.

George Anthony, angry after the ruling, left the courtroom before the hearing ended.

The autopsy report contains no X-rays or photos of the remains.

According to Garavaglia, intermixed with Caylee Anthony's skeletal remains were two plastic garbage bags, a canvas laundry bag and a baby blanket with a Winnie the Pooh print. A pair of partially decomposed, multi-colored shorts were among the clothes, the doctor said.

"The roots growing into the vertebrae and bags indicate the body was placed there months prior to being found," Garavaglia said. "There is nothing inconsistent with the body being placed there soon after the date of [Caylee] being last seen alive."

George Anthony said he saw his granddaughter leave his house with her mother for the last time on June 15, 2008. Officials allege Caylee was killed by her mother a short time later.

Since her arrest in July, Casey Anthony, 23, has remained behind bars in Orlando.

The search for Caylee ended December 11, when a meter reader brought out a bag containing a skull from the woods. He said he had contacted police three times in August to report a suspicious bag in the area. A deputy was ultimately fired for not properly searching the area.

The remains were confirmed through DNA testing to be those of Caylee Anthony.

CNN's Natisha Lance and John Couwels contributed to this report.