(CNN) -- Jenna Nielsen was 22 years old, 8½ months pregnant and looking forward to bringing her third child into the world when her life came to a violent and abrupt end on June 14, 2007. 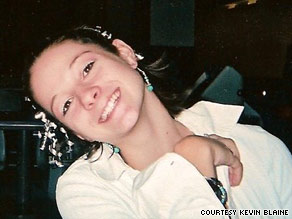 Jenna Nielsen was driving her newspaper route when she was stabbed to death two years ago.

She was working her new job on a newspaper delivery route she'd taken to help her young family make ends meet. That's when police say she was stabbed to death in front of a convenience store in Raleigh, North Carolina -- a crime that has police and family members still looking for answers.

Marking the two-year anniversary of his wife's death, with no arrests and no named suspects announced by police, Tim Nielsen can only shake his head when he ponders who may have targeted his wife.

"I believe she was just at the wrong place at the wrong time," said Nielsen, who has returned to his native Utah, where his family helps him raise his two children -- Schyler, 5, and Kaiden, 2. "My wife had no enemies."

Police say that two years ago last Sunday, Nielsen arrived at the AmeriKing Food Mart about 3:30 a.m. to deliver papers.

She'd parked and just finished loading the newspaper vending machine when she was attacked on the way back to her car.

Nielsen was stabbed in the neck. Two of her car doors were left open and her purse and car keys were still inside, police said.

Authorities will not publicly speculate on a motive. But Jenna's family believes the attack may have been an attempted sexual assault and that Jenna fought back.

Investigators say they have received thousands of tips and interviewed hundreds of people, but they still don't have a clear picture of a suspect.

"This case is actively being investigated still," she said. "But we have a few missing pieces and hope for the public's help."

Early in their investigation, the police released a composite sketch obtained from two witnesses who saw the attacker fleeing the scene of the crime.

But they have since backed away from the image, saying it was misleading people. They describe Nielsen's attacker as a short, slightly built man in his late teens or early 20s with black hair pulled back into a long ponytail.

He was wearing a dark sleeveless shirt and baggy blue jeans shorts, according to witnesses.

Shortly after Nielsen's death, a knife was found by a homeless man not far from the scene of the crime. Police won't comment on whether the knife might be the murder weapon. There has been other evidence collected.

"They found DNA, but I can't say more than that," Tim Nielsen said.

Other members of Nielsen's family quote police as saying they have DNA evidence from the killer, but have not been able to match it with anyone they've interviewed over the years.

The family has stayed active in keeping Nielsen's case in the public eye.

They've held "Vigils Against Violence" the last Sunday of every month and maintain justice4jenna.org, a Web site devoted to her memory and to the effort to track down her killer.

"It's hard to believe that it has been two years since someone selfishly stole you from our family," reads the site's home page. "There isn't a day that goes by that you and Ethen [the name planned for her unborn child] are not in our thoughts.

"Schyler and Kaiden are growing so fast. They look like you, act like you and laugh like you -- for that we are able to see you each and every day through them. Schyler asks about you often and helps Kaiden remember Mommy."

The family also have been advocates for the so-called Unborn Victims of Violence Act, state legislation that would create a fetal homicide law in North Carolina.

Currently, state law does not consider a killing a double homicide when an expectant mother is slain.

Jenna Nielsen's father, Kevin Blaine, takes every chance he can to plead for help from the public

"Help find the people that did this to her," he said. "The person who did this is still out there."

The family is offering a $15,000 reward for the arrest and conviction of the individual responsible for Nielsen's murder. Anyone with any information on this crime is asked to call the Raleigh Police Department at (919) 227-6220.