Rockefeller poser gets up to 5 years for kidnapping

BOSTON, Massachusetts (CNN/IN Session) -- A German man who called himself Clark Rockefeller and passed himself off for years as a member of the moneyed clan was sentenced Friday to four to five years in prison for kidnapping his daughter. 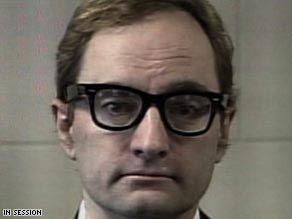 The man who said he was Clark Rockefeller actually is Christian Karl Gerhartsreiter.

Earlier in the day, a jury of eight women and four men found Christian Carl Gerhartsreiter, 48, guilty of the kidnapping and assault and battery with a dangerous weapon.

Judge Frank M. Gaziano noted that Gerhartsreiter showed little regard for the impact his actions had on his former wife and daughter. He said he also considered the defendant's long history of deceptive and manipulative behavior, including the use of multiple aliases.

Gerhartsreiter already has spent a year in jail, meaning that with credit for good behavior he could spend just another year or two in prison.

Gerhartstreiter, who was born in Germany and is in the U.S. illegally, faces removal by immigration authorities when he completes his sentence.

In addition, his lawyer said, authorities in Los Angeles, California, have convened a grand jury to investigate his possible role in the 1985 deaths of a couple who rented a carriage house to him.

The defendant stared straight ahead as the judge announced the sentence. He was equally impassive when the jury returned its verdicts.

The jury rejected Gerhartsreiter's insanity defense, but found him not guilty of two lesser charges after deliberating for 26½ hours over five days.

He faces up to 15 years in prison. A sentencing hearing was set to begin at 2 p.m. ET.

After announcing the verdict, all 12 jurors returned to the courtroom and delivered a prepared statement.

"This was a complicated case, and not as clear-cut as it might have seemed to those who followed it in the media," the jurors' statement said

"We are confident that our verdict is fair and just, and based only on the information we were legally allowed to consider," it continued. "Our verdict is a unanimous one, as the law requires, and all of us stand by the verdict completely. "

The jurors said the terse statement was their final word on the case. They did not take questions.

The case has attracted international attention because of the defendant's bogus claim to be related to the Rockefellers, one of America's wealthiest families. He fooled even his wife of 12 years, who said on the witness stand that she had "a blind spot" for a man who charmed her, then controlled her and bullied her.

Prosecutors said Gerhartsreiter came to the United States from Germany in 1978 as a student. They said he is a con man who has been telling fanciful tales and misrepresenting himself ever since.

The defense said he has long suffered from mental illness that boiled over into insanity when he abducted his 7-year-old daughter, Reigh, last summer.

The jury heard closing arguments and legal instructions before retiring for deliberation Monday.

"This is not a man playing with a full deck," said Jeffrey Denner, one of two lawyers who gave closing arguments for the defense.

According to testimony from defense experts, Gerhartsreiter believed his daughter was in danger. He also believed they could communicate telepathically and shared a secret language.

"You see him descending into madness," Denner said. "You see completely irrational action that other people are buying because of the name Rockefeller and the appearance, the veneer, of respectability with a powerful wife."

The defense called two experts who, he said, spent 28 hours with the defendant before diagnosing him as having a narcissistic personality disorder and grandiose delusions.

He described Gerhartsreiter as a controlling man who was angry that his former wife, Sandra Boss, had moved with their daughter to London in December 2007.

According to testimony, Boss, a Harvard business school graduate and senior partner at McKinsey & Co., a global management consulting company, took full custody of the child, giving her ex-husband $800,000, two cars, her engagement ring and a dress he had bought her.

Denner asked how a successful businesswoman who was educated at Stanford and Harvard universities and made $1 million a year could fall for an impostor.

"He told compelling stories," she said. "It seems stupid in hindsight, and it really was, but that is how it was. ... I lived with a person who told me a set of internally consistent things."

"I was completely traumatized," Boss said of the abduction. "I was hysterical."