Commentary: Witness to history and horror

Editor's note: Deborah E. Lipstadt is currently Resnick Invitational Scholar at the Center for Advanced Holocaust Studies at the United States Holocaust Memorial Museum and Dorot Professor of Modern Jewish and Holocaust Studies at Emory University. She is the author of "History on Trial: My Day in Court with a Holocaust Denier." For more information, read here 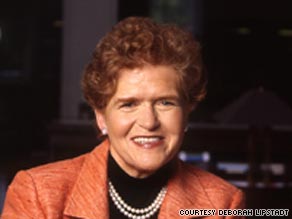 Deborah Lipstadt was preparing to give a lecture on Holocaust denial when the shooting began.

WASHINGTON (CNN) -- I write this from my office in the Center for Advanced Holocaust Studies at the United States Holocaust Memorial Museum where I have been privileged to have had a fellowship for the past semester. Up until Wednesday at 12:50 p.m., it had been a perfect visit. Everything a scholar could hope for: exceptional scholarly resources and a magnificent museum staff.

When I arrive each morning, long before the doors open to the public, I always marvel at the people waiting to enter. They represent every religion, ethnic group, and nationality. In the past few weeks I've seen hundreds of school groups as well as Annapolis midshipmen, scouts, FBI trainees and police force members.

They come to learn about the consequences of hate and prejudice. And Wednesday the entire world was given a graphic reminder of what that hatred can produce when a white supremacist, anti-Semitic, Holocaust denier, entered the building and allegedly shot a guard before being wounded himself.

I was on the level below the shooting in a classroom preparing to begin a lecture on Holocaust denial. I was going to speak about those who claim, among other things, that 6 million Jews were not murdered by the Nazis, that the gas chambers never existed, that the "Diary of Anne Frank" is a fraud, and that the survivors who claim it happened are psychopaths and liars.

They contend that the Jews have made this all up to win the sympathy of the world and to get reparations -- i.e. money -- from the Germans and other perpetrators. It is classic anti-Semitism.

As I was about to begin the lecture, we heard the shots. Then came the screams followed by an eerie silence. We locked the door and waited. Soon a staff member told us to exit the building at once. As we walked out of the classroom hundreds of people poured out of bathrooms, classrooms, and other areas to which they had been herded in the moments after the shooting.

We gathered on the grassy area across from the museum and within seconds museum staff appeared with signs: 1,2, 3, 4. Visitors were directed to gather in front of the sign for the floor they were on when they were evacuated. This enabled families, friends, and school groups to find one another.

Afraid that there might be another shooter lurking about, the police moved us north towards the Washington Monument. Slowly the school groups and other visitors left. Those of us associated with the museum just waited. There was nothing for us to do but there seemed to be a certain comfort in staying together.

I stood with a Holocaust survivor who had been at the Visitors Services desk. Someone brought a wheelchair for her. She brushed it aside and pointed at a far younger staff person who had a cast on his leg: "He needs it more than I."

We soon heard that the alleged shooter was an 88-year-old white supremacist. I quickly said: "I can assure you that he was not just a white supremacist." And, as predicted, we learned that he is an anti-Semite, a denier and a racist. It is a jigsaw puzzle which always fits together. In short, he was a hater who needs no rational reason to exercise his hatred.

Then we learned of the death of Officer Johns, a really tall man, who always had a smile and a kind word. He would often kid me about all the stuff I seemed to be perpetually schlepping. I had seen him about 40 minutes before the shooting when I passed the entrance on my way to the classroom where I would be lecturing. The lobby was crowded, a normal day at the Holocaust Museum. Now no day that ends here quietly and safely will be normal.

I sit in this building surrounded by offices in which computers blink, half filled coffee cups are all over the place, and purses and briefcases sit near people's desks. When the SWAT team reached this floor and evacuated people they were told "Leave. NOW." As one of my office neighbors later said to me, "When men with guns and dogs tell you to leave you don't stop and gather up your stuff. You leave. NOW. "

In the library, laptops are sitting on tables and backpacks are on the floor. All the paraphernalia is normal. Just the people are missing.

We who were here have so much to be thankful for:

For Officer Johns who gave his life defending this museum.

For the guards who did precisely what they are trained to do and did it so very well.

For the fact that this man's hate resulted in the death of "only" one man and not of scores more.

Above all, we have to be thankful for the existence of this place. It is a place that stands to teach about the consequences of hatred and prejudice. This week it taught that lesson in the most horrifying of ways.

Today the building will be full again. There will be staff members and, we hope, people who have decided not to let the haters win.

They know that the only way to defeat those who spread evil is by not letting them stop us. Who ever thought that there would be a time when coming to a museum which teaches about hatred, prejudice and anti-Semitism would itself be an act of defiance?

That time is now.

The opinions expressed in this commentary are solely those of Deborah Lipstadt.