(CNN) -- Richard Strandlof said he survived the 9/11 attacks on the Pentagon. He said he survived again when a roadside bomb went off in Iraq killing four fellow Marines. He'd point to his head and tell people he had a metal plate, collateral damage from the explosion. 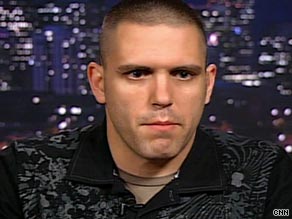 Richard Strandlof says he didn't mean to cause harm when he lied about being a military veteran.

Crowds ate up his story. He canvassed Colorado appearing at the sides of politicians. Inspiring and seemingly authentic, he spoke on behalf of veterans at the state Capitol.

It turns out the whole thing was a lie. He wasn't at the Pentagon. He was never a Marine. He never served his country. He never graduated from the Naval Academy. He claimed his name was Rick Duncan.

He formed a group called the Colorado Veterans Alliance, and the FBI is now investigating whether he embezzled money as a result.

Where was he on 9/11, the day he said he witnessed heroism firsthand?

"I was in San Jose, California, watching it in horror on TV with a few other people," Strandlof told CNN's Anderson Cooper.

He was at a homeless shelter at the time.

Strandlof denies being a pathological liar. He says he suffered from "some severely underdiagnosed mental illness" and that he got caught up in the moment around "people who are passionate and loved what they did."

He told CNN he had put on a "production, which I'm sorry for."

"Hopefully the people that I hurt can in some way gain closure from that, and I myself don't know what I can do short of leaving them alone and not being in their lives, to make that happen," Strandlof said.

He said he's not sure exactly how he's hurt people. "It's not for me to say, and time will tell," he said.

Hal Bidlack, a former Air Force lieutenant colonel, is one of those people. He ran for Congress as a Democrat and had Strandlof appear with him. Bidlack isn't too happy.

"Once one lie fell apart, the whole series of things ... just cascaded into an ocean of lies," he said.

Bidlack was at the Pentagon when it came under attack on September 11, 2001. He now realizes that Strandlof stole portions of his own story.

"Now that we know he's a lying fraud," Bidlack said, "I think he was just parroting my own story back to me."

Doug Sterner has catalogued hundreds of people claiming to be military veterans who never served in the military. He says it's typical for those perpetuating the hoaxes to claim mental illness.

"I don't buy that," Sterner said. "What he was doing was looking for a cause to promote himself. I see this repeatedly. I've had a hundred cases just this year like Rick Strandlof's. ... What they're doing is building a kingdom of self and feeding their own ego."

Sterner has pushed for a federal database listing the names and citations of all decorated military veterans to help put an end to such cases. He said Strandlof has robbed true veterans of their veracity.

"Doing good does not take away from the bad that he did," he said. "Because of Rick Strandlof, the next global war on terrorism veteran that speaks in a school or talks to the media or gets involved in politics is going to be questioned."

According to the Denver Post, Strandlof came to authorities' attention first in 1997, when he was sentenced to five years on forgery and bad-check charges.

With the FBI now investigating him for fraud, he told CNN he's innocent. "We did not take money to use on non-veterans projects. I did not enrich myself on this. I did not gain any money from this," he said.

That's not the point, said Sterner. "The one thing he robbed from every veteran that comes out now is credibility."

All About The Pentagon