Soldier hurt in shooting: 'I like defending this country'

(CNN) -- A U.S. soldier who survived a shooting this month at a Little Rock, Arkansas, recruitment center said Tuesday that he plans to stay in the Army, and he expressed gratitude for all the military has done for him and his family. 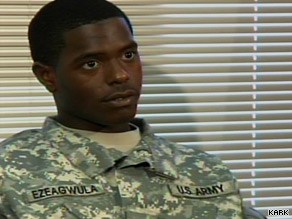 "I like defending this country," said Pvt. Quinton Ezeagwula, 18.

He said he was shot in his back and grazed on his head and "my rear" in the shooting June 1. Another soldier, Pvt. William Long, 23, of Conway, Arkansas, was killed.

Authorities said the two were standing outside the recruitment center smoking when Abdulhakim Muhammad, 23, pulled up and opened fire.

Muhammad is charged with one count of capital murder and 16 counts of engaging in a terrorist act, charges stemming from shots fired at an occupied building.

Muhammad, a native of Memphis, Tennessee, and a Muslim convert, told authorities that he was "mad at the U.S. military because of what they had done to Muslims in the past," Little Rock homicide detective Tommy Hudson said in a police report.

Ezeagwula, of Jacksonville, Arkansas, said he was still a little sore but "doing fine." Appearing in uniform, he had little to say but added "sir" or "ma'am" when responding to reporters' questions at a news conference.

Watch Ezeagwula talk about the incident »

A recruiting commander who was with him said Ezeagwula could not comment on whether he is back home or comment at length on the shooting itself because of the ongoing court case.

Ezeagwula's mother, Sonja Ezeagwula, said that when officials called to tell her about the shooting, "I thought they were calling about my other son showing out at school."

"I feel very good about him staying in the Army and wanting to represent the United States," she said. "I think that's a wonderful thing, because most people would feel bitter or angry, but he's not. He doesn't feel that way, and I'm glad."

She said her son stayed away from gangs and drugs as a youth and was doing something positive. "He was supposed to have been a statistic from a dysfunctional family. Look what happened."

Ezeagwula and Long were part of a recruiting program called "hometown recruiting assistance," under which soldiers tell their stories to potential recruits.

Ezeagwula had not been deployed but was headed for Scofield Barracks near Honolulu, Hawaii, the recruiting commander said. Although his departure was delayed, he will still go there, the commander said.

Ezeagwula said he joined the Army because "I just want to help my family out. I thought it was a good way, and then when I got in it, I actually learned to love the Army."

He said he is a construction machinery operator but hopes to eventually become a sergeant and then a drill sergeant.

He said he was participating in the recruitment program because he wanted to show his peers that there is more out there beyond Arkansas and that the Army is a good way to see it.

He said Long's family "welcomed me with open arms" and has been supportive. And he expressed thanks to well-wishers and those who have offered prayers: "I really appreciate what they have done for my family and Pvt. Long's family."

"The Long family, those are some superb people. Extra-special people," Sonja Ezeagwula said. "I just thank God. Every day, I thank God."

She said she was amazed by the outpouring of support after the shooting. "I'm just overwhelmed with how much love Americans have for this country. I really am. And I'm glad I got a chance to see it."

She said her family is Christian, "and we believe when something happens, God will turn it around," and good will come of it.

Asked her feelings about Muhammad, Sonja Ezeagwula said she had no ill feelings toward him but said that she hopes justice is served and that the outcome for him, whatever it may be, is fair.

Ezeagwula laughed when asked what runs through his head before he goes to sleep at night. "I really don't know, sir," he said. "A lot of things run through my mind at night. I'm still me. I really can't pay attention to that kind of stuff."

Ezeagwula said he had known Long for "almost two weeks. He was a very nice person."

Standing outside the center before the shooting, he said, the two were discussing their trips away from Arkansas. Long said he had been to Georgia, and Ezeagwula had just returned from Missouri.

When a reporter asked him whether he would quit smoking now, Ezeagwula didn't answer, but his mother said, "Yes," adding that he had told her he stopped before the shooting.

"See how God will reveal it to you?" she said.