(CNN) -- A 28-year-old Oregon woman has been charged with murder after the body of a new mother was found in the crawl space of her home. 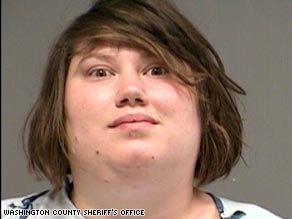 Police released a photo of Korena Roberts, who is charged with murder.

Rescue crews first went to Korena Roberts' home in Washington County on Friday in response to a call of a newborn in distress. They found Roberts' boyfriend unsuccessfully trying to revive the baby using first-aid techniques.

Roberts told deputies the baby was hers, the county sheriff's office said. Medics noticed a lot of blood at the home, and sent Roberts and the baby to a hospital.

"Doctors at the hospital were not able to revive the baby," said Sgt. David Thompson of the Washington County Sheriff's Office in a news release. "They also discovered that Ms. Roberts had not delivered a child at anytime in the recent past."

Deputies returned to the home, where they found the body of 21-year-old Heather Snively in the crawl space under the kitchen, Thompson said.

Authorities learned Snively had been pregnant at the time she was attacked, and they determined she was the mother of the infant.

An autopsy will now determine how the baby was delivered, and whether he died before or after birth, Thompson said.

The outcome could result in another murder charge for Roberts, deputies said.

Residents in the woman's Mill Creek Drive neighborhood said Roberts had told them she was expecting a child, according to CNN affiliate KPTV.

"She didn't appear to be pregnant to us," neighbor Doug King told KPTV.

All About Oregon • Murder and Homicide