(CNN) -- The 5-year-old girl found the note tucked inside a plastic bag and left in a basket used as a flower pot. 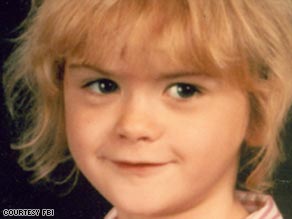 April Tinsley, 8, abducted in Fort Wayne, Indiana, was raped and killed 21 years ago. The case was not solved.

"Hi Honey I Been watching you," it said. "I am the same person that kidnapped an Rape an kill Aproil tinsely here is a present foR yo you are my next vitem."

A used condom was stuffed in the bag alongside the note.

It was March 2004 -- nearly 16 years after 8-year-old April Tinsley was abducted from a Fort Wayne, Indiana, neighborhood, raped and killed.

Her killer remains at large, and police believe he has surfaced several times, scrawling a message in crayon on a barn in 1990, then leaving four chilling notes for children in the Fort Wayne area years later.

"Investigators believe the case is 'highly solvable,' and after 21 years, their desire to bring April Tinsley's killer to justice is stronger than ever," the FBI said.

CARD teams were created three years ago, aimed at bringing together "a variety of experts in child abduction cases who could quickly respond on the ground to help local authorities with time-sensitive investigations," the FBI said.

While CARD responds to abductions and disappearances, the team also works cold cases, like April's, the agency said. "As team members discovered, there is enough evidence -- including notes, pictures, and DNA left by the killer years after the murder -- to make investigators hopeful they can break the case."

The team includes behavioral profilers, agents and analysts from the FBI's Crimes Against Children Unit and coordinators and representatives from the National Center for the Analysis of Violent Crime and the Violent Criminal Apprehension Program.

April Marie Tinsley was playing outside with friends on Good Friday, April 1, 1988. As the three girls were moving from one friend's home to another's, the first-grader realized she had left her umbrella behind and went back to get it.

She never returned. Her body was found three days later, in a ditch some 20 miles northeast of the Tinsley home. April's body was clothed, but an autopsy showed she had been raped and suffocated.

Two years later, a teenage boy called police to report a message scrawled in crayon and black marker on the front doors of a barn about 10 miles from April's home. He never saw the writer, according to the TV program "America's Most Wanted," which profiled the case in May, but each day noticed the print was getting darker and more pronounced.

Although the message was hard to read, the person wrote he had killed April, and that he would kill again. Crayons were left behind at the scene, "America's Most Wanted" said on its Web site. Police attempted to conduct forensic analysis on them, but came up empty.

Then, in spring 2004, the four notes appeared at various Fort Wayne homes, several of them placed on bicycles that young girls had left in their yards. All the notes were written on lined yellow paper and placed inside plastic bags along with used condoms or Polaroids of the killer's body, the FBI said. Several notes referred to April.

Authorities have reason to believe the writer of the 1990 note also left the notes 14 years later, Fort Wayne police said. "That tells us that the person's still around, still out there," said Fort Wayne police Capt. Paul Shrawder.

"It's definitely very odd," he added. "Even the FBI is puzzled by the behavior, that the letters would come out so many years later and then nothing again."

DNA evidence was recovered from April's body and from the condoms, Shrawder said. While police have no one to match it with at this point, "things have been resubmitted and retested" as technological advances have been made, he said.

The advantage of the CARD team, from a local police standpoint, is that members only work such cases, while "we're local -- we work on whatever happens here," Shrawder said. The team has experience in such matters, and might look at new aspects, angles and possibilities that local authorities haven't thought of, he said.

Federal investigators were deployed to Fort Wayne to work the Tinsley case earlier this month. After the "America's Most Wanted" profile and the renewed push, authorities received between 400 and 500 tips, Shrawder said. Some could be ruled out right away -- someone who had died between the murder and the 2004 notes, for instance, he said. DNA samples were taken on about 150 people.

Police are still trying to run down about 50 or 75 tips, he said. "That was the purpose, was to go out and run down every single one of these, no matter how vague it was."

Some of the authorities' leads, according to the FBI, include identifying Fort Wayne residents who used Polaroids as late as 2004; tracking down a green paisley bedspread similar to that seen in one Polaroid; and looking at misdemeanor offenses in the area near the time of April's death and the 2004 note spree, as offenses like indecent exposure could indicate more serious sex crimes.

In addition, the FBI has released a behavioral profile of Tinsley's killer. Police believe he is a white male currently in his 40s or 50s who prefers and desires sexual contact with children, particularly little girls.

"This offender has demonstrated that he has strong ties to northeast Fort Wayne and Allen County," the profile said. "This is where he likely lives, works and/or shops. You may be standing next to him in line at the grocery store, sitting beside him in the pew at church, or working beside him on the production line."

Such profiles can be helpful in that they might spur local residents to tell police, "You know, I always wondered about this one guy," Shrawder said.

To offer information on the Tinsley case, contact your local FBI office or Fort Wayne police at (866) 602-7745.

All About Murder and Homicide • Federal Bureau of Investigation • Fort Wayne