WICHITA, Kansas (CNN) -- Kansas prosecutors have brought murder and assault charges against the man suspected of killing Wichita physician George Tiller, whose women's clinic was a frequent target of protests against abortion. 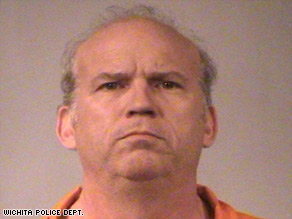 Scott Roeder, 51, is being held on a first-degree murder charge and two counts of aggravated assault.

Burgess set a preliminary hearing in the case for June 16.

Police have not disclosed a possible motive in Tiller's killing, but associates said Roeder was a regular among the anti-abortion protesters who routinely gathered at his Wichita clinic, Women's Health Care Services.

Tiller, 67, was one of the few U.S. doctors who performed late-term abortions, and he had survived one attempt on his life before being gunned down in his church Sunday morning.

Prosecutors will not seek the death penalty "under the facts and circumstances that are known at this time," District Attorney Nola Foulston said.

Kansas state law allows the death penalty only in certain circumstances, such as multiple killings, contract killings, the deaths of police officers or jailers, or a slaying that takes place during a sexual assault.

Roeder was in the county jail during his brief initial court appearance and appeared in court via video. He requested a court-appointed lawyer during the hearing, during which he was dressed in maroon jail coveralls and appeared to fidget.

Burgess ordered Roeder to have no contact with witnesses or Tiller's family.

Since Tiller's death, supporters have left a few bouquets of flowers outside his clinic. The architecture of the low-slung, windowless concrete building -- which is fenced off, monitored by cameras and separated from buildings behind it by a moat-like ditch -- reflected the threats he faced for nearly two decades.

In a statement issued Tuesday, Tiller's family said they hope his "valuable work" will go on, "but there have been no final decisions made about the long-term plans for the medical practice."

"There is currently no plan to immediately reopen the clinic and no patients are being scheduled at this time. The Tiller family's focus, of course, is to determine what is in the best interests of the employees and the patients," the statement read.

Dr. Leroy Carhart, a Nebraska physician who also practices at Tiller's clinic, said at his suburban Omaha office that he left a Monday meeting in Wichita with the belief that the practice would reopen "in the very near future." But he said, "At the present time, there's no known future."

Carhart was the plaintiff who challenged a federal ban on a type of late-term procedure that opponents labeled "partial-birth" abortion. The Supreme Court upheld the ban in 2006.

Tiller practiced medicine for nearly 40 years. Most of his patients were grappling with pregnancies that were "fatally or catastrophically complicated by medical problems," Dr. Warren Hern, a Colorado physician and a friend, said on CNN's "Anderson Cooper 360."

"The many women who come for late abortions, in fact, have desperate circumstances with a desired pregnancy," he said. "They want to have a baby, not an abortion."

But Tiller's practice made Wichita a flashpoint in the controversy over abortion, which opponents routinely decry as the killing of unborn children.

"Operation Rescue has diligently and successfully worked for years through peaceful, legal means, and through the proper channels to see to it that abortionists around the nation are brought to justice. Without due process, there can be no justice," it said.

"This is the result of 35 years of anti-abortion harassment and terrorism and hate speech and rhetoric and harsh names and exploitation of the abortion issue as a political issue to get power," said Hern, who runs an abortion clinic in Boulder, outside Denver. "And this is the inevitable result of this kind of hateful behavior by the anti-abortion movement."

Carhart blasted abortion opponents who resort to violence "and those who support and incite these violent acts." He declined to name names but urged the estimated 46 million women who have received abortions and their supporters to demand that government officials "enforce the laws on the books that protect us from hate crimes."

"And if these officials don't openly respect your right to choose abortion, you have the power to vote them out of office," he said.

All About George Tiller • Abortion