DETROIT, Michigan (CNN) -- Renea Mitchell said her son Robert wanted "nothing to do" with police, a feeling she said is "nothing new" among teenagers in Detroit. 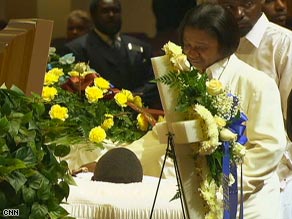 Renea Mitchell mourns over the body of her son, Robert, at his funeral.

But she wants to know why police felt they needed to use a Taser on a scared, 16-year-old, learning-disabled boy with no criminal record.

Robert Mitchell died April 10 in an abandoned house in Warren, just across Eight Mile Road from Detroit proper. His death led to a lawsuit and a protest last week by about 100 people on the thoroughfare, which separates Detroit from its northern suburbs.

Police said the teen was resisting arrest after bolting from his cousin's car during a traffic stop, and the use of the Taser was justified. But Renea Mitchell calls her son's death "murder."

Warren police had pulled over Mitchell's cousin, Chris Davis, for having an expired license plate when Mitchell "jumped out and started running," Davis said.

"I told him not to, but he was real scared," Davis told CNN. "He was petrified. He hopped out the car and started running."

Police followed Mitchell into an abandoned house about two blocks away. Officers tried to apprehend him once he was inside, but he resisted, Warren Police Commissioner William Dwyer told CNN.

"They ordered him several times not to resist, and he continued to resist," Dwyer said. "They had no alternative to use what they felt at the time was non-lethal force."

The commissioner called Mitchell's death "a tragedy," but said police who watch someone run from them "can only assume he committed a crime or is wanted for a crime." The officers had been trained to use Tasers on people resisting arrest, "so there was nothing wrong with using that Taser," Dwyer said.

The 5-foot-2, 110-pound Mitchell died after being shot once with a Taser, which delivers a 50,000-volt electric charge. The Macomb County medical examiner's office says an autopsy report has not yet been completed. The Warren Police Department's internal affairs office ruled the use of the Taser was justified, and the officers involved in his death are back on the job. But Mitchell's family is suing the department and the city, arguing there was "no articulable reason" to use the Taser on him.

Police consider the Taser a non-lethal weapon, and Dwyer said it has been "a very useful tool." But the human rights group Amnesty International has documented more than 350 cases in which people have died after being shocked with Tasers.

Mitchell's death was at least the third involving people shot with Tasers in 2009, and the second in Michigan. A 15-year-old in Bay City, about 115 miles north of Detroit, died in March; a Virginia teen died in January.

Other high-profile cases have raised questions about the use of the devices. In October 2007, a Polish immigrant who spoke no English was Tasered and died after a scuffle with police at the airport in Vancouver, British Columbia.

In January 2008, a man died after being shocked nine times with one of the devices during his arrest on a cocaine possession charge. The Winnfield, Louisiana, police officer who arrested him was fired and indicted on manslaughter charges. He has pleaded not guilty and faces trial in July.

While police defend the use of the devices, Warren Mayor James Fouts has called for a review of how they should be used.

"Obviously we have a legal situation, so I'm not able to give too strong opinion either way," Fouts told CNN. But he added, "We need to re-evaulate and look very closely at what it is that we're currently doing."

But Renea Mitchell said she wants to see the police face a courtroom over her son's death.

"When you're living in this world, people die every day," his mother said. "God is my father, and I trust that Robert is safe. Robert is safe, I have no doubt in my mind. I just want justice now."

All About TASER International Inc. • Michigan