(CNN) -- A former professional football player and his ex-girlfriend have been charged in the killing of her wealthy boyfriend for money, a breakthrough in a cold case dating to 1994. 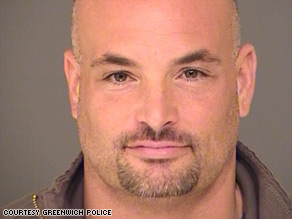 Eric Naposki, a former football player, has been charged in the killing of an ex-lover's boyfriend.

Eric Naposki and Nanette Packard McNeal face the possibility of life sentences over the shooting of Bill McLaughlin, according to the Orange County, California, district attorney.

Authorities said Packard McNeal persuaded her ex-boyfriend to kill McLaughlin so she could claim a $1 million life insurance policy, inherit $150,000 and get the right to live in his beach house for a year.

She gave Naposki a key to McLaughlin's house and information about when he would be home, officials said Wednesday.

Naposki shot the victim six times, then went to work at a nearby nightclub where he was a bouncer, according to authorities.

Packard McNeal met McLaughlin after she ran a personal ad that said, "I know how to take care of my man if he knows how to take care of me," the district attorney said in a statement. He supported her financially when they were dating and bought her a beach house, authorities said.

Packard McNeal has been jailed once for writing checks to herself from McLaughlin's account without his knowledge, including a $250,000 check on the day he was killed. She pleaded guilty to that crime in 1996 and was jailed for a year.

The Orange County officials said new evidence prompted the arrests of the two suspects, who were charged with special circumstances murder for financial gain.

Packard McNeal is due to appear in court Friday. Naposki was arrested in Connecticut, where he lives. Orange County authorities have asked that he be sent to California to face trial.

Naposki, 42, played in the NFL for the New England Patriots and the Indianapolis Colts.

All About Murder and Homicide • Orange County • National Football League