(CNN) -- Former Atlanta Falcons quarterback Michael Vick left a federal prison in Leavenworth, Kansas, early Wednesday, according to his publicist and the Federal Bureau of Prisons. 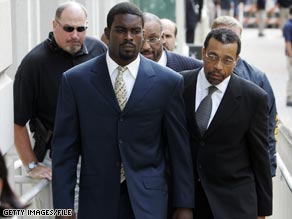 He will serve the last two months of his 23-month sentence in home confinement in Virginia, his publicist Judy Smith said. He is a native of Newport News, Virginia.

Vick, 28, pleaded guilty in August 2007 to a federal charge of bankrolling a dogfighting operation at a home he owned in Virginia.

He will return to professional football as soon as September if reinstated by the NFL, according to the sports agent who negotiated Vick's 10-year, $140 million contract with the Falcons.

Meanwhile, Vick's attorneys have said he will work at a Newport News construction firm following his release, and he has also agreed to participate in a documentary for $600,000.

Last month, a federal bankruptcy judge denied a Chapter 11 bankruptcy plan presented by Vick, urging him to offer the court another plan to emerge from bankruptcy.

Michael Vick's attorney and the CEO of the Humane Society talk to Larry King.
Tonight, 9 ET

The plan called for Vick to come up with $750,000 to $1 million in cash to be paid to creditors, U.S. Bankruptcy Judge Frank Santoro said, but added he saw no evidence Vick could come up with that much. Santoro suggested Vick's next plan not call for him to keep two houses and three cars, as did the rejected proposal.

In testimony, Vick acknowledged committing a "heinous" act and said he should have acted more maturely. He said he has been earning 12 cents an hour as an overnight janitor in prison. His Falcons salary, he said, was between $10 million and $12 million. He acknowledged failing to handle his money well.

Watch a panel discuss his release »

Vick will work on programs aimed at preventing youths from getting involved in dogfighting, and also on programs to assist young people who have already been involved in the blood sport.

Pacelle said the Humane Society was approached by Vick's representatives. He said he has traveled to Kansas twice to meet with the former quarterback, and during the second visit, the two discussed how Vick could use his sway over youths to discourage them from involvement in dogfighting, as well as help those who were apprehended in connection with it.

Details have not yet been hammered out, Pacelle said, but will be in the next couple of days. iReport.com: Does Vick deserve a second chance?

More attention has been paid to dogfighting as a result of Vick's case, Pacelle said. The Humane Society, which offers rewards for tips involving dogfighting, has recently paid out $40,000 in five different cases, he said.