(CNN) -- ln April, a Maryland man wrote six suicide notes expressing his love and sorrow for his family, and then shot his wife and three children, before killing himself with a shotgun. 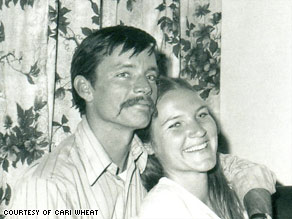 Curt Wheat and his wife, Marie, married in 1971. After 32 years, Wheat shot his wife and then himself.

This month, a man killed his wife and two sons in their home near Tampa, Florida. Troy Bellar chased after his teenage son with a high-powered rifle, but the 13-year-old escaped. Bellar later shot himself.

In some of this year's most disturbing cases of family violence, fathers have turned against their own flesh and blood -- asphyxiating and beating teenagers, firing shots into sleeping children tucked in bed, slaying grandparents and shooting infants in diapers.

The killings are cruel inversions of nature where a father murders his entire family in an act called familicide. After the carnage, the question lingers: Why did they do it?

For decades, psychiatrists have been studying such cases to determine what mental issues trigger this behavior. A person who kills his family could have control issues that lead him to decide the fate of the children, spouse and pets, researchers said.

While mentally healthy people cannot make sense of killing someone they love, for people with mental illness, "it has to do with their distorted thinking and depression," said Donna Cohen, a professor and head of the Violence and Injury Prevention Program at the University of South Florida.

The person with a mental illness views his wife and children as possessions, believing, "I have to keep this. This is mine," Cohen said. "Nobody else is able to take care of them except me. If I can't control this in my life, I'll preserve it in death so that my world doesn't change. It's the psychiatric issues."

Murder-suicide plots could brew in a person's mind for months, even years.

Out of 1,500 to 2,000 murder-suicides a year, the Violence and Injury Prevention Program at University of South Florida estimates

"For a period of time, the idea to commit mass murder takes hold of them and they can't shake it," said Louis Schlesinger, forensic psychology professor at John Jay College of Criminal Justice in New York City.

If there is news about other familicides, the intense news coverage may cause others to lose their inhibition and commit the same type of crime.

"They think they're saving their family and that they will be remembered with sympathy," Schlesinger said.

Those thoughts become action when a precipitating event, or trigger, occurs, such as divorce, suspected infidelity or loss of job.

While research shows that suicide rates rise when the economy is in trouble, it may not be true for murder-suicides.

See graph on the economy and suicides. »

Statistics from the Violence and Injury Prevention Program at the University of South Florida based on news reports, found that murder-suicides seesawed during the last nine years.

According to research at Case Western Reserve University in Cleveland, Ohio, about 60 percent of the perpetrators of familicides were unemployed. While the shaky economy could increase stress levels, experts warned against attributing the spate of violence to the economy.

"That's careless to say a bad economy causes people to kill whole families," said Schlesinger. "You could kill during good times. It's very complicated and not simple as a bad economy."

In research during nearly three decades, Dr. Philip Resnick, director of the division of forensic psychiatry at Case Western, has outlined two motives for familicides: revenge or despondency. In latter cases, a "nonhostile, hopeless father" kills his family to save them from perceived doom, because he feels unable to provide for them.

"They become very depressed as the breadwinner," Resnick said. "With their distorted, depressive perceptions, they feel that rather than allow their children to go hungry, they may feel they're doing a favor to take their family with them as they end their own life. ... They're not depriving them of life, they're ending what they see as an intolerable life."

In recent cases, some men were facing financial turmoil. In April, a New York attorney who was involved in questionable financial dealings asphyxiated and beat his wife and 11- and 19-year-old daughters in a Maryland hotel. Investigators later found that $20 million from his clients was missing.

A man who decides to commit suicide might want to avoid his family facing the stigma, said Richard James Gelles, dean of the School of Social Policy and Practice at the University of Pennsylvania.

"They couldn't leave people behind to be ashamed and humiliated," said Gelles.

On the night of his birthday in 2003, Curt Wheat shot his wife, Marie, as she slept in their bedroom, then shot himself. Neither of the couple's two children was at the Sahuarita, Arizona, house during the shooting.

His then 29-year-old daughter, Cari Wheat was living in San Francisco, California. Wheat believes her father pulled the trigger out of a sense of love for her mother.

"My dad made a decision," Wheat said. "I'm sure he believed that my mom would not have lived with that decision -- that it would've been so destroying for her. So unfortunately, he made that decision for both of them."

He was being treated for depression and trying different medications, she said. Her father was an introvert, a geologist who examined mines and quarries. He often took his family camping and they split their time globetrotting between Arizona and Australia. Her mother was gregarious elementary school librarian.

"My dad was kind of a loner, quiet," Wheat said. "My mom was full on cheerleader, perky and in-your-face. They were different and complementary."

Curt Wheat did not leave a note or any explanation for the shooting.

"I'm definitely angry...," she said. "You'd be angry with anyone else who took your parents away. It's confusing because it is somebody you love."

In 2003, her younger brother, Joshua Wheat, was living with the parents, but had been at work during the shooting. After the murder-suicide, the question of whether Curt Wheat would've shot his son had he been home that night has crept into their minds.

"It's something my brother really struggles with and wonders about," Cari Wheat said. "From research that I've done, once you're at the state and you have made this decision to take your own life, your thinking is so primitive. It's very black and white. There are no more gray areas."

Every 16 minutes in the United States, a person commits suicide, according to the Centers for Disease Control and Prevention.

"I don't think we realize that because it's hush-hush," Wheat said. "It isn't a character flaw in those uncles or brothers or parents. It's a mental illness. That's what makes it tricky. We're all squeamish about mental illness. I don't think we've gotten to a place yet where in the U.S., where we see this as a chemical problem, like a disease, like we'd treat breast cancer. ... Suicide is the end result, it's the way people die from that [mental health] disease."

Case Western researchers found that more than three-fourths of the offenders in 30 murder-suicides in the Cleveland, Ohio, area had signs of mental illness. Half of the men had borderline personality disorders, which trigger significant mood upheavals, impulsiveness and feelings of worthlessness.

"We can't prevent all of them," Cohen said. "But it's essential that we begin to educate communities about signs of mental health problems and distress."

Close family members and friends usually know of problems in the household prior to the murder-suicide.

"People don't get involved, even when they know there's threat in violence because they believe they don't think anything will happen," Cohen said. "It's essential to get to domestic violence safe houses and be much more proactive in understanding there are people who have problems."