(CNN) -- The body of their 2-year-old granddaughter, Caylee Anthony, was found in Florida in December. And their daughter, Casey Anthony, is charged in her death. She could be executed if convicted. It's a case that has gripped America. 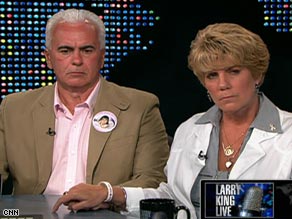 Appearing with their lawyer, Brad Conway, they talked about whether they still support their daughter completely and what their lives have been like under the media glare.

Larry King: We are amazed because we've received -- get this -- thousands of blog responses to your appearance here tonight. And, honestly, most of them are critical. Why do you think people are angry at you?

Cindy Anthony: Because they don't understand. They've never been in our shoes. So a lot of people, especially bloggers, ... like to pick things apart. And, you know, we're a target.

King: But what are they picking apart?

King: Do you talk to Casey a lot?

Cindy Anthony: I haven't spoken to Casey in person since October the 14th. We write.

Cindy Anthony: Because every time we go to the jail to see her, it's videotaped and then it's all over "Nancy Grace" and, you know, the six o'clock news.

King: How do you explain the body being found so close to home?

Cindy Anthony: I can't explain it. I don't know if anybody can right now.

King: But you have thoughts, don't you, George?

George Anthony: Well, I mean there's so many things I really would like to know, but there's a lot of things I just don't know.

King: But you've got to ask.

George Anthony: I wish I had an opportunity to talk to my daughter. But, again, we don't have that chance.

King: But logically, if she's not involved, what could be said that could harm her?

Cindy Anthony: You know, people pick everything apart. If Casey cries, she's not crying enough. If she smiles at us like she did in court the first time she saw us, then she's smiling for the wrong reasons.

King: [Caylee's] body is stuffed in a laundry bag. The skull is wrapped in duct tape. Could you imagine your daughter would do that?

Attorney Brad Conway: The duct tape probably was not wrapped around the skull. We know that there was no flesh and no hair attached to the duct tape, yet that's what goes out in the media and that's what people assume to be true. And that's the unfair part: This young lady has not had her opportunity in court, yet people have drawn conclusions from discovery that's out there.

King: Cindy, the meter reader who found the body alerted the authorities as far back as August about a suspicious bag. This tip wasn't acted on. Do you think there would be any difference if the body were found earlier?

Cindy Anthony: I'm sure there would be, if she was really there back in August. I'm not convinced of that yet.

King: Are you trying to find a murderer? I mean do you have a private detective?

King: Brad, is this a rock and a hard place [for George and Cindy Anthony]?

Conway: It is. What the Anthonys are trying to do is deal with the grief of the loss of their granddaughter while trying to help other people out. And, unfortunately, there are going to be a lot of people that go through what they go through. The only way to take a negative thing and make a positive is share their grief publicly and let people know that it's OK to do this.

King: The Anthonys have written a Web exclusive [for CNN] responding to their critics. You won't see it anywhere else. See the Anthonys' blog and comments from readers

King: Did you ever try to harm yourself?

Cindy Anthony: I wrote suicide notes, but I never acted on it.

Cindy Anthony: You know, when you are away from someone and something is ripped out of your life so suddenly ... Imagine a child -- not having that child around. And, weeks into it, not knowing where she was and what had happened to her was devastating. It was hard to get up in the morning and, you know, go on with your day.

King: What stopped you?

Cindy Anthony: My faith. You know, I knew that's not the right thing to do.

King: Do you completely believe she didn't do it?

Cindy Anthony: Yes, I do.

King: Cindy, you were the first to call authorities last July to say you hadn't seen Caylee for a month and that your daughter's car smelled like it had a dead body in it. Didn't you worry that that would be kind of presumptive from the state to make a case out this?

Cindy Anthony: You know, Larry, on July 15th, all I wanted was the police department out to my house out to help me look for Caylee.

King: Did you smell the smell?

Cindy Anthony: I smelled a smell in the car. I smelled it in my refrigerator with sour food.

King: Do you have any idea why [Casey] didn't call police all the time her daughter was missing?

Cindy Anthony: I can't answer that. Casey was probably grieving as best as she could. It doesn't make her guilty.

King: No, but weird.

Cindy Anthony: It doesn't make her guilty. Yes, but a lot of people do weird things under stress, under tragedy. So it doesn't make you guilty.

King: Would you favor that whoever did this crime should face the death penalty?

Cindy Anthony: You know, I'm not a fan of the death penalty for anybody.

George Anthony: I'm opposed to it.

Caller: I have a question for the Anthonys. What will they do if their daughter is found guilty? Will they still support her or will they cut all ties?

Cindy Anthony: I can't cut tie from my own flesh and blood, so no.

King: Do you expect to testify, George?

George Anthony: I'm sure we'll be in court when everything comes, probably sometime next year.

King: Do you think they'll be called, Brad, both?

Conway: Yes, sir, they will.

Another caller: Where do you find the strength to support your daughter when everyone seems to be against her?

Cindy Anthony: You know, my faith has gotten stronger and stronger every day through these last nine months.

All About Caylee Anthony • Casey Anthony