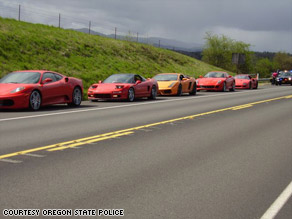 Police say the cars were pulled over on a dangerous stretch of Highway 18 near Grand Ronde, Oregon.

So said Oregon State Senior Trooper David Petersen after he was able to catch up with six exotic sports cars on a stretch of Highway 18 near Grand Ronde on Thursday, according to a news release.

Perhaps a more amazing feat was that he stopped all the cars simultaneously.

One of the drivers was later cited again on a different highway.

The drivers of the cars -- consisting of Ferraris, a Lamborghini and an Acura NSX -- told Petersen they were part of a group of 20 similar cars making an annual road trip, the news release said.

They were all cordial and cooperative, and were cited with speed racing, a class A traffic violation that can command a fine of $627, Hastings said.

After receiving reports Thursday morning that several sports cars were speeding and passing in no-pass zones west of Grand Ronde, Petersen set up east of the casino town, near McMinnville, and waited.

Five of the cars soon blew past him, running about 100 mph in a 55-mph zone, Hastings said. As Petersen pulled onto Highway 18 in pursuit, a sixth car passed him.

"I guess when you're going too fast, you're in a rock and a hard place," Hastings said.

Highway 18 runs from Dayton, Oregon, in the Willamette Valley to the Pacific coast. The stretch where the cars were cited is considered particularly dangerous and the Oregon Department of Transportation provides additional funding to enforce traffic laws there, Hastings said.

About two hours after the incident, another trooper pulled over the Lamborghini from the group in Multnomah Falls, about 90 miles east. The driver of the car, which bore the the license plate "BADBUL," was cited for driving 90 in a 65-mph zone, according to a news release.