(CNN) -- Michigan authorities are investigating whether foul play led to the death of a 9-year-old quadriplegic girl whose body was found inside a public storage facility. 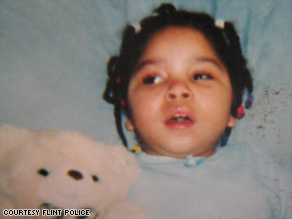 Shylea Thomas, 9, of Flint, Michigan, was quadriplegic and used a feeding tube.

"This is a very sad and tragic case that hurts all of us involved in the ongoing investigation," Genesee County prosecutor David Leyton said at a news conference Wednesday.

Shylea Myza Thomas of Flint, Michigan, hadn't been seen in six weeks, and relatives reported her missing Tuesday, Leyton's office said. Her adoptive mother, who is also her aunt, is in custody as a suspect, special assistant prosecuting attorney John Potbury told CNN.

No charges have been filed pending the results of the autopsy, he said.

Because of her physical disabilities, Shylea used a feeding tube. She suffered from quadriplegia because of a "suffocation issue" in her crib at 3 weeks of age, Leyton said.

On Wednesday, Flint police found her body stuffed inside a garbage bag in a public storage facility in Vienna Township, near Flint, Leyton said. The bag was covered in mothballs "in an apparent attempt to mask odors from the dead body," his office said in a news release.

"For her to have to live like that, and then to die and be stuffed into a bag and plastic bin in a storage facility, just breaks my heart," the prosecutor said.

The station also reported that investigators are trying to determine why the girl's disappearance wasn't reported until six weeks after she went missing.

Relatives told WJRT that they remember Shylea as a happy child, who loved music and whose smile was infectious.

Watch a family in shock »

"The last memory I actually have of Shylea is seeing her when she was in my care," said her second cousin, Josette Thomas. "She was on the bed listening to the radio and smiling. Those are actually the memories I want to keep in my head. I don't want that memory to leave me."