WASHINGTON (CNN) -- The FBI for the first time has placed an animal rights activist on the bureau's "Most Wanted Terrorists" list. 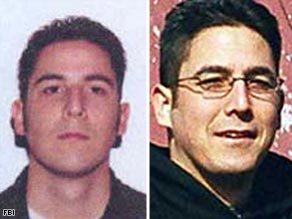 The FBI announced Tuesday the addition of Daniel Andreas San Diego to the list, hoping a burst of international publicity associated with the move will help investigators find him after six years on the run.

San Diego, 31, may appear to be out of place on a terrorist list with familiar names like al Qaeda's Osama bin Laden, Ayman al-Zawahiri and Adam Yahiye Gadahn. The "strict vegan," according to the FBI, is charged with bombing two corporate offices in California in 2003. The blasts caused extensive property damage but no deaths.

Vegans eat no meat or any other food containing animal products.

Authorities allege San Diego bombed facilities in Emeryville and Pleasanton, California, because he believed the Chiron and Shaklee Corporations had ties to animal-testing labs.

The sophisticated homemade bombs had ammonium nitrate brand explosives and relied on "kitchen timer style mechanical timer devices," according to an FBI affidavit.

After both bombings, e-mails from a group called "The Revolutionary Cells-Liberation Brigade" claimed responsibility for the acts.

But the computer network specialist also sports several elaborate tattoos. According to an artist's rendering of the body art, San Diego has one in the center of his chest of a burning hillside and the words "It only takes a spark" in a typewriter-style font.

An abdominal tattoo shows burning and collapsing buildings, while his back features a leafless tree rising from a road above buildings that are burning but still standing, the FBI says.

Last year, agents pursued reports that San Diego was hiding in Costa Rica. They also received a report he was spotted in rural southern Virginia.