LOS ANGELES, California (CNN) -- A man suspected of killing his grandmother and setting her body on fire was returned to Los Angeles, California, after being arrested in Mexico, authorities said Wednesday. 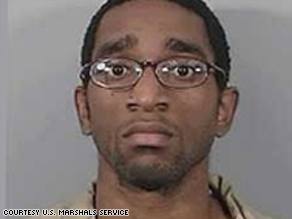 Joseph Ettima, 25, is suspected of murdering his grandmother and burning her body.

"He was homeless," Tapia said. "Didn't have much with him, didn't have any identification."

Ettima initially claimed to be from Belize, Tapia said. When authorities were unable to verify that, he then said he was Nigerian. But officials were able to determine he was actually from California, where he was sought in the January 19 death of his 69-year-old grandmother, Emma Hardwick-Street, in the Orange County town of Los Alamitos.

After allegedly killing Hardwick-Street, authorities believe Ettima set fire to her body and house to cover up the crime before fleeing. "The crime is particularly heinous in that two young children were in the home at the time of the murder and witnessed the event," according to a U.S. Marshal's statement.

Two of Hardwick-Street's grandchildren, ages 8 and 3, were present at the time of her slaying, according to Los Alamitos police. The 8-year-old was Ettima's younger brother, according to the U.S. Marshals wanted poster on Ettima.

According to the U.S. Marshals' wanted poster on Ettima, the suspect's 8-year-old brother witnessed the slaying. A 3-year-old girl was also present, according to the Orange County Register. Authorities said Ettima had recently been paroled from prison and had "a long criminal history of violence with weapons."

The history includes robbery, weapons possession, manufacturing of weapons and indecent exposure, according to a February statement from U.S. Marshals.

In addition to the homicide charge, Ettima was wanted on charges of robbery, arson, child endangerment and parole violation.

"Ettima has a long history of violence, and his latest crime demonstrates a callous disregard for human life that is unimaginable," said John F. Clark, director of the U.S. Marshals Service, in the Wednesday statement. "Capturing him was one of our highest priorities."

Ettima's arrest "is the first step in bringing justice to the victim and those affected by this brutal crime," said Los Alamitos Police Chief Todd Mattern. "Ettima's capture provides a sense of security to the community and brings closure to the victim's family."

Nearly 110,000 fugitive felons were apprehended last year by U.S. Marshals task forces, nine of them from the agency's 15 Most Wanted List, the statement said. Four were arrested in Mexico.

All About Murder and Homicide • Crime