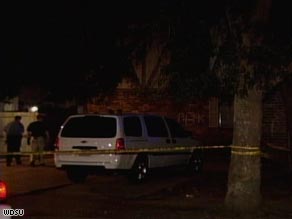 A fourth victim, an 11-year-old girl, was shot multiple times and was in critical condition at a hospital, said Col. John Fortunato of the Jefferson Parish police.

Fortunato said two men in dark clothing and carrying handguns kicked in the door of a Terrytown, Louisiana, home and began shooting before 4 a.m. (5 a.m. ET).

The dead include a 19-year-old woman, a 23-month-old boy and a 6-year-old boy. The two children were shot in the head while they lay in a back bedroom in the house, Fortunato said.

The woman was shot in the back, he said. She and the toddler were pronounced dead on arrival at a hospital, and the 6-year-old boy died at the hospital, he said.

Terrytown is a suburb of New Orleans.

All About Murder and Homicide • New Orleans • Jefferson Parish