(CNN) -- The son of an infamous CIA double agent who is himself accused of spying was released from jail Friday in Portland, Oregon, pending trial after a federal judge ruled he did not pose a flight risk. 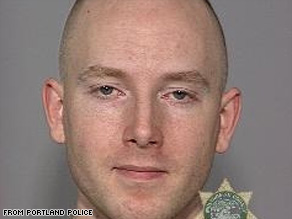 Judge Anna J. Brown ordered that Nathaniel Nicholson, 24, can be freed provided he stay with family, not leave Oregon without permission from authorities and wear a GPS monitoring device.

Brown also ordered that he not have any contact with his father, the admitted spy Harold James "Jim" Nicholson.

The elder Nicholson pleaded guilty in 1997 to spying for Russia and is the highest ranking CIA officer ever to be sentenced for espionage. While serving a 23-year prison sentence, prosecutors allege, Jim Nicholson, 58, restarted his career as a double agent and enlisted his son Nathaniel in his efforts to collect money owed to him by the Russian spy services and to sell more secrets.

Both father and son were charged in January with acting as agents of a foreign government, money laundering and conspiracy to commit money laundering. They have pleaded not guilty. Court appointed lawyers representing the men did not return CNN's calls for comment

According to the indictment, Nathaniel Nicholson made trips to California, Mexico, Peru and Cyprus, where he met with Russian government representatives who gave him payments totaling over $35,000 in cash.

According to court testimony, Nathaniel Nicholson, who is a former U.S. Army paratrooper, initially told authorities that he had traveled overseas to visit "a battle buddy." The FBI agents informed Nicholson that lying to them was a federal crime and offered him a "mulligan," or a chance to change his story, according to the agent's testimony. At that point, FBI special agent John Cooney testified, Nicholson became more "forthcoming" about his meetings with Russians.

If convicted, Jim and Nathaniel Nicholson could face up to 20 years in jail.

All About Central Intelligence Agency • Federal Bureau of Investigation