NEW YORK (CNN) -- She survived a bloodbath at a Lane Bryant store in Tinley Park, Illinois, by playing dead. The only survivor, she gave police a detailed description of the gunman. 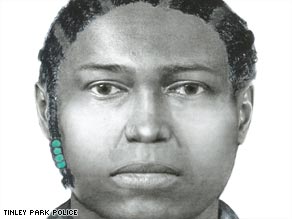 The Illinois State police worked closely with the survivor to come up with a composite of the gunman.

Police aren't identifying their witness to protect her safety. Five other women lost their lives at Lane Bryant on February 2, 2008. The gunman is still at large.

The crime began to unfold shortly after 10 a.m. when a man posing as a delivery man walked into the store. He chatted briefly with two customers and two employees. Then, police said, he pulled out a gun and announced a holdup.

Store manager Rhoda McFarland managed to call 911 from her cell phone at 10:44 a.m., just before she was shot to death. She got to her phone while the gunman was distracted, even though she was bound by the duct tape.

On the call, posted on the Tinley Park police Web site, a man can be heard saying, "I'm losing it."

The six women were shot execution style. Five of them were dead by the time police arrived, a few minutes after McFarland's call.

A sixth woman survived. She, too, had been shot and left for dead, but tricked the killer by pretending to be dead.

The killer was not wearing a mask or disguise, so she was able to describe him in detail. She told police he was a 6 foot African-American male, average weight, medium to dark skin tone, with braided hair and cornrows, husky build, and between 25 and 35 years old.

His hair was pulled back, but one braid hung along his right cheek with light-green beads at the end of it, she told police. Police have released a composite sketch based on the witness' description.

The investigation remains open and active, and all theories are still being investigated, police say. The investigation has included a thorough vetting of the victims' backgrounds to determine whether any of them had any enemies.

"None of the victimology so far has led to any suspects yet," said Commander Pat McCain of the Tinley Park Police Department.

"Certainly, the surviving witness didn't seem to recognize the killer, but maybe one of the dead victims knew him. We don't know," McCain said.

The weapon used was a .40-caliber Glock. Bullet casings were left at the scene and the killer took the weapon with him.

More than a year later, forensics from the crime scene are still being processed, police said. Investigators won't comment on whether the gunman left any fingerprints, hair or other trace evidence.

Police say they have received more than 5,000 tips and feel this case will be solved. But at this point, they have not named a person of interest or a suspect.

Investigators are asking for the public's help. There is a $100,000 reward for the arrest of the person or persons responsible for the Lane Bryant shootings.

Have information? Please call the Tinley Park Police tip line at (708) 444-5394 or go to the tip line on the department's Web site.