(CNN) -- Women at two Kansas colleges are on edge after warnings that the same man may have raped 13 women at the schools in the last eight years. 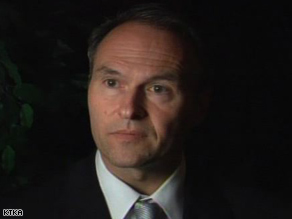 Kansas Attorney General Steve Six says each victim has described her attacker in a similar way.

The University of Kansas and Kansas State University have alerted students to possible danger for those who stay in town during spring break, which starts Monday.

Thirteen rapes have happened during breaks in the school year in the last eight years near the colleges. Eight happened near Kansas State University in Manhattan. Five happened about 85 miles away, in Lawrence, where the University of Kansas is located.

Investigators say the same person may be responsible for all 13 rapes.

Students like Carly Wagner, a senior at Kansas State, are taking precautions. She said she and her roommates already make sure to look out for each other.

"None of us ever walk alone at night. We go pick each other up or make sure that there's no case where you have to be alone at night," she told CNN affiliate WIBW.

The Kansas attorney general, Steve Six, said Wednesday that similarities in the attacks lead investigators to believe they may be looking for the same person. Those similarities include "the age of the victims, the location of the rapes in off-campus housing" and "the fact they occurred during breaks in the school session."

In addition, each victim has described her attacker in a similar way. Investigators are looking for a white man in his twenties of average height and weight. He has also been reported to have covered his face during the attacks, Six said.

The University of Kansas sent an e-mail to students Monday warning those staying on campus for spring break.

"If staying in Lawrence, students should take reasonable precautions, as some reported sexual assaults and other crimes have occurred during breaks," read the warning, which did not refer specifically to the past rapes.

The University of Kansas also posted recommendations on its Web site, including checking locks on home and apartment doors, walking in groups and knowing the location of campus emergency buttons.

The specific dangers during college breaks have been on the university's radar for some time, says Jill Jess, a university spokeswoman. Before winter break, the university offered free self-defense classes to students as a result of the past attacks, she said.

Kansas State warned its students, faculty and staff of the past attacks in an e-mail last month. It was the second e-mail that campus officials have sent out in recent years regarding the rapes.

"It's scary to walk around campus or be on a college campus not knowing at night what goes on and who can be around," one student told CNN affiliate KTKA.

The Kansas State Women's Center has also been working diligently over the past year to make students aware of the rapes, said Mary Todd, the center director.

She has worked with some of the victims and has learned from their accounts that there was often no sign of forced entry. This has led her to believe the attacker entered residences during the day, when a lot of students feel safe leaving doors unlocked. By emphasizing such details, she said, the center hopes students will keep their doors locked.

The Women's Center and a group called Wildcats Against Rape have distributed pamphlets at campus buildings as well as several off-campus locations.

"We encourage women to be safe, but we encourage everybody in the community to also look out," Six said. "Look out for your friends, call if you see something suspicious and just be vigilant during the spring break time."

All About Sexual Offenses • University of Kansas • Kansas State University