(CNN) -- Five Guantanamo prisoners accused in the September 11, 2001, terror attacks on the U.S. staunchly defended their actions, calling the operation "blessed" and "great" and the accusations against them "badges of honor." 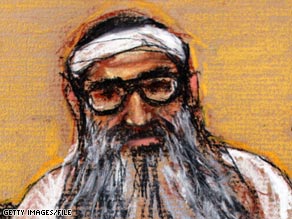 Khalid Sheikh Mohammed is shown in a courtroom sketch at Guantanamo Bay in January.

"You are the last nation that has the right to speak about civilians and killing civilians," the five said in a response this month to the U.S. government's war crimes charges.

"You are professional criminals, with all the meaning the words carry," the response said. "Therefore, we will treat you the same. We will attack you, just like you have attacked us, and whomever initiated the attacks is the guilty party."

The six-page response from Khalid Sheikh Mohammed, who plotted the attacks, and four others castigates the actions of the United States and its allies in the Middle East and calls the United States "the terrorist country number one in the world."

The military commission set up to hear the men's cases at the Guantanamo Bay inmate facility received the signed document Thursday, and a military judge ordered its release on Monday.

The five are members of the al Qaeda terror network. Mohammed, who has taken credit for planning the attack, and the four other prisoners call themselves members of the 9/11 Shura Council.

"With regards to these nine accusations that you are putting us on trial for; to us, they are not accusations. To us they are badges of honor, which we carry with pride. Many thanks to God, for his kind gesture, and choosing us to perform the act of Jihad for his cause and to defend Islam and Muslims," the response stated.

It ties the United States to attacks in "Palestine and Lebanon by providing political, military, and economic support to the terrorist state of Israel, which in turn, is attacking unarmed innocent civilians." It also noted American actions in Iraq and the dropping of atomic bombs on the Japanese cities of Hiroshima and Nagasaki in 1945.

As for "crimes in violation of the law of war," it cites Israeli occupation of Palestinian and Lebanese land and the displacement of Palestinians, the occupation of Iraq and Afghanistan and the mistreatment of prisoners at places such as the Abu Ghraib prison in Iraq.

Answering another accusation, hijacking and/or endangering a vessel or an aircraft, the five said, "if you do not respect the innocent in our countries, then we will do the same, by exposing you to danger and hijacking in the air, at sea and at land."

Quranic verses were cited in the filing, and the men underscored their defense of "oppressed" Muslims.

"Our religion is a religion of fear and terror to the enemies of God: the Jews, Christians and pagans. With God's willing, we are terrorists to the bone."

It also predicts that the United States "will fall, politically, militarily and economically."

"Your end is very near and your fall will be just as the fall of the towers on the blessed 9/11 day," the court filing said.

"We ask from God to accept our contributions to the great attack, the great attack on America, and to place our nineteen martyred brethren among the highest peak in paradise," the response said, in reference to the al Qaeda militants who hijacked the airplanes that crashed into the World Trade Center's twin towers in New York, the Pentagon in Washington, and a field in Pennsylvania.

Nearly 3,000 people were killed in the attacks.