(CNN) -- A former official of a cabinet company that has laid off employees has been arrested on suspicion of embezzling $9.9 million from the company over seven years. 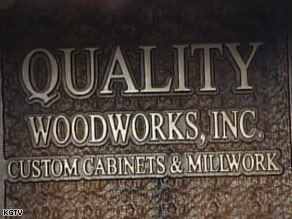 Annette Yeomans, who was chief financial officer for California-based Quality Woodworks, was arrested Wednesday after a yearlong investigation, according to the San Diego County Sheriff's Department.

Because of the embezzlement, the San Marcos, California, company was forced to lay off employees and restructure, police said.

"She used these monies to gamble. She used them to remodel her home. She used them to buy expensive clothes, shoes, [including] a $4,000 pair of Italian shoes. She had more than 400 pairs of shoes in her closet," Sgt. Mark Varnau of the Sheriff's Department told CNN. "She had 160 high-end purses valued at $2,000 apiece."

"A sheriff's investigation revealed that on a weekly basis, Yeomans would spend $25,000 on her credit card and then pay off the balance the following Monday with company funds," according to a sheriff's department statement.

Yeomans had an attorney present when she turned herself in Wednesday, Varnau said, but he did not know the attorney's name. Attempts by CNN to locate and contact her attorney were unsuccessful on Sunday.

An investigation revealed that Yeomans spent nearly $25,000 to convert a bedroom in her home into a closet, featuring high-end cabinetry with granite countertops, a crystal chandelier and a 32-inch plasma television, according to Varnau. The 400 pairs of shoes were valued, on average, at $600 each, the sheriff's department said in the statement.

Yeomans is believed to have gambled away $6 million, Varnau said.

Yeomans' husband, who also worked at Quality Woodworks, is not suspected of involvement, he said.

"As far as we can tell, he was not aware of what she was doing," Varnau said. Her husband is a cabinet installer, he said, and "they certainly weren't working at the same level in the company."

"I think he just simply believed that she made a good wage and that she received bonuses and was being compensated well for the work that she did," Varnau said.

Yeomans reached an agreement with Quality Woodworks and turned over her possessions to the company so it could recoup some of the losses, Varnau told CNN.

"She lost her home, her cars, her clothes, every identifiable asset to try to pay back the company for the loss, and now she's facing prosecution," he said.

He estimated the company would be able to recover about $2 million.

Yeomans faces charges of grand theft and embezzlement, and is jailed with bail set at $10 million, said Varnau, who added that is one of the largest bail amounts he has seen.

Yeomans is believed to be a flight risk, he said, and "we're not completely satisfied we've identified all her assets."

All About Crime • Embezzlement