WASHINGTON (CNN) -- A former high-ranking NASA official was indicted Friday for allegedly guiding more than $9.6 million in agency funds to one of his consulting clients. 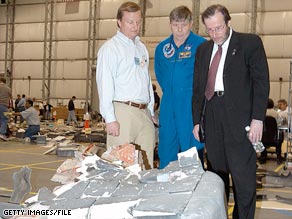 When Stadd left NASA, he founded a management consulting firm called Capitol Solutions that specialized in providing services for clients in aerospace-related industries. One of those clients was Mississippi State University's GeoResources Institute. According to the indictment, in 2005, Stadd helped steer NASA funds from an earth science appropriation to his client.

Stadd returned to NASA for three months in 2005 as a special government employee in the office of NASA's administrator. According to prosecutors, Stadd "knowingly and willfully participated as a government officer in recommending and rendering advice on the allocation of NASA funds to Mississippi State University, a matter in which Stadd knew he had a financial interest."

The indictment says Stadd wrote to NASA officials saying he had recused himself from all matters involving clients and had also told his clients he could only advise them on matters that did not involve the space agency. But prosecutors allege an MSU official complained to Stadd that the university might not receive funds it hoped to get from NASA because of requirements there be a nationwide competition to win the earth science funds.

According to the indictment, Stadd met with another NASA official and claimed there was a prior agreement to give the state of Mississippi earmarked funds. Later Stadd is alleged to have sent an e-mail to an MSU official saying in part, "If I intervene anymore then all sorts of red flags will go up and I fear getting MSU and me in trouble."

MSU's GeoResources Institute ultimately received $9.6 million. Stadd was paid $85,000 in fees and travel costs by the institute. Prosecutors say he later asked MSU for a pay raise and pointed to his "revectoring" of the NASA funds to support his request.

If convicted on all charges, Stadd faces up to 15 years in prison.

All About NASA • Mississippi State University