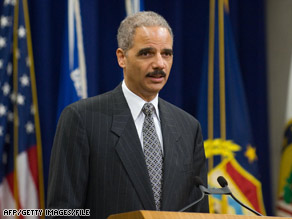 "Enormous amounts of narcotics" have been confiscated in the operation, U.S. Attorney General Eric Holder said.

Investigators made 52 arrests in overnight raids in California, Minnesota and Maryland, increasing to more than 750 the number of suspects detained in the coast-to-coast operation to disrupt the Sinaloa cartel, Holder said.

Drug Enforcement Administration agents said $59 million has been seized in what was dubbed Operation Xcellerator.

Holder heralded the operation and vowed to vigorously help the Mexican government battle the powerful cartels.

"International drug trafficking organizations pose a sustained, serious threat to the safety and security of our communities," Holder told reporters.

DEA acting Administrator Michele Leonhart, who joined Holder at the Justice Department for the announcement, said the operation dealt "a crushing blow" to the Sinaloa cartel.

"We successfully concluded the largest and hardest-hitting operation to ever target the very violent and dangerously powerful Sinaloa drug cartel," she said.

Large amounts of illicit drugs, including 12,000 kilograms of cocaine, 1,200 pounds of methamphetamine and 1.3 million ecstasy pills, were confiscated in the United States during the operation, Holder said.

"These are enormous amounts of narcotics -- drugs otherwise destined for the streets of the United States," Holder said.

In two years, cocaine prices more than doubled, while purity dropped by a third, indicating enforcement efforts are having an impact, Leonhart said.

Holder praised Mexican President Felipe Calderon as "courageous" for his willingness to fight the drug cartels, and noted the estimated 5,000 deaths that resulted from drug battles in that country last year.

DEA agents said fierce fighting between the two most powerful Mexican cartels -- the Sinaloa cartel, known as "the Federation," and the Gulf Cartel -- was largely about control of transportation routes for illegal drug trafficking.

Wednesday's announcement comes as increased violence along the Mexican border is prompting concern among state and federal officials in the United States.

In Texas, Gov. Rick Perry called on the Department of Homeland Security to send "1,000 more troops" to the border in his state. "I don't care whether they are military troops, or National Guard troops or whether they are customs agents," he said.

Meanwhile in Washington, the top Republican on the House Judiciary Committee urged Democrats to call a hearing on border violence to highlight the threat.

"The recent surge in drug-related violence on the Southwest border has turned some American communities and neighborhoods into the "Wild West," said Rep. Lamar Smith, R-Texas.