(CNN) -- Three more bodies and a fetus have been discovered west of Albuquerque, New Mexico, where six bodies were unearthed earlier this month, police said Tuesday. 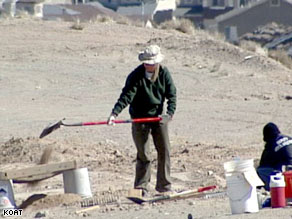 The new discoveries bring to nine the number of bodies that investigators have discovered, including the remains of a pregnant woman who was found Monday. She appeared to be in her first trimester, police spokesman John Walsh said.

The remains of two people were found Saturday.

The New Mexico Office of the Medical Investigator has been analyzing the bones.

Officer Nadine Hamby said the bodies appear to have been buried between 2003 and 2005, and authorities believe the deaths were tied to a single incident.

A woman walking her dog discovered the graves about two and a half weeks ago on the 92-acre property that had been graded in preparation for development. The graves found so far are located on about 10 acres, said Hamby, but the area being searched keeps expanding.

Only one of the victims has been identified. Police said she was Victoria Chavez, a prostitute and drug user who was last seen in 2003 and reported missing in 2004.

Hamby said there is housing south and east of the vacant land. After rain caused flooding, surrounding neighbors complained to the developer, who made culverts to divert the water, apparently bringing the first bone to the surface, she said.

From 15 to 20 law enforcement officers, anthropologists, archaeologists and students or professors from the University of New Mexico have been digging at the site 12 to 16 hours a day, Hamby said. The FBI and deputies from the Bernalillo County Sheriff's Office are among those involved.

Chavez's remains were identified through dental records that her family provided when she was reported missing. It will be tougher to identify the others, police said. For example, one had no dental work and another had no skull.

The cause of Chavez's death was not known, but Albuquerque police spokesman John Walsh speculated last week that her death could be related to violent sex trade.

He said police are looking at reports of missing prostitutes over the years and are trying to determine possible suspects. He said he hopes family members of those missing could help authorities.

Police are trying to figure out how the bodies got there. "At this stage, the best way I can describe it, we have a handful of theories," Walsh said.

All About New Mexico • Murder and Homicide