Brooke Astor would have been 'mortified' by son's trial

(CNN) -- New Yorkers feasted on the stories when the news broke in 2006: Brooke Astor, a socialite and megaphilanthropist with Alzheimer's, had allegedly been swindled of millions and mistreated by her own son. 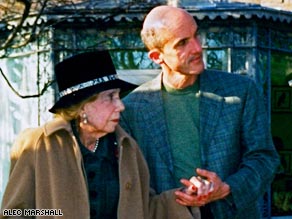 Brooke Astor and grandson Philip Marshall outside her New York country estate, Holly Hill, in 2001 or 2002.

Anthony "Tony" Marshall, her only child, was indicted on criminal charges including grand larceny, possession of stolen property, forgery and conspiracy.

Jury selection for the criminal trial was scheduled to begin Monday. But co-defendant Francis Morrissey's attorney filed an 11th-hour motion to sever his client's trial from Marshall's.

The motion was denied late Friday, and a new trial date has been set for March 2. Morrissey, Marshall's former lawyer, faces charges including forgery and scheming to defraud.

A lawyer representing Marshall, Fred Hafetz, would say only that there would be "no plea" and that he hopes his client will "be vindicated."

The trial is likely to resuscitate the tabloid feeding frenzy, which has fostered headlines such as "Bad heir day," "Mrs. Astor's disaster" and "DA's kick in the Astor."

It's not the way those closest to Astor want to remember her. And the disclosures expected to spill forth from the witness stand aren't the type that Astor, who died in August 2007 at 105, would want shared in public.

"She would have been mortified," said Vartan Gregorian, a longtime friend and president of the Carnegie Corporation of New York. "She was very private."

Through her late husband's Vincent Astor Foundation, Astor was credited with giving New York, where the Astors made their fortune, about $200 million. And although she felt it was expected of her to be proper and elegant, Gregorian said, her wealth didn't define her.

Talk of money, real estate and other people's misfortunes were off-limits at her dinner parties, he said. "She was not ostentatious. ... She was very funny, very witty and very caring."

When a would-be robber accosted her, she foiled the holdup attempt with this response: " 'Excuse me. My name is Mrs. Astor. I don't think we've been properly introduced,' " Gregorian remembered with a laugh.

For 23 years, Linda Gillies directed the Astor Foundation and witnessed her hands-on approach to doing good -- not just for her "crown jewels," which included the Metropolitan Museum of Art and the New York Public Library, but also for lower-profile programs.

Astor was often quoted as saying, "Money is like manure; it's not worth a thing unless it's spread around." But for her, again, it wasn't just about the money.

Betty Cooper Wallerstein, a community organizer who benefited from Astor's help in saving 2,500 low-income apartments on Manhattan's Upper East Side, described Astor as being equally comfortable mingling with tenants as she was in high society.

She remembered attending Astor's 90th birthday party and being struck by the diversity of the crowd waiting to get inside. Around her were elected officials, the social elite, big names such as Henry Kissinger as well as Astor's staff members and activists such as herself.

"She was as lovely to me as she was to the dignitaries who were there," Wallerstein said. "It was such a beautiful and democratic line."

Many close friends and staff members would not speak to CNN, as they will be testifying in the trial or will be involved in a later suit to contest Astor's will, which her son is said to have changed. But those who did speak were quick to share memories they'll always hold dear.

The one-time police detective sergeant, whom Astor always called Sergeant, said he handled security and later served as the full-time head of staff at Holly Hill, Astor's New York country estate. He was employed by her for three decades, up until he had a stroke eight years ago.

But his status as employee hardly described their relationship.

"She was my friend. She was a good lady," he said, his voice cracking and his words slightly slurred because of the stroke. "She said, 'I love you' ... and I loved her."

He built the gazebo where Astor watched sunsets and brought her the pink roses she loved. She took him to see a house that she knew he'd fall for and helped secure a good price. When Astor lost part of a finger breaking up a dog fight, she called on Fasciani to fly in to be by her side.

And two years after his stroke, he sought Astor's approval, which she gave with a wink and a nod, before marrying his wife, Marilyn, who helped speak for Fasciani by phone from Florida.

But working for Astor had its distractions, said Alicia Johnson, who was head of staff at her Maine estate, Cove End, for about 12 years.

In Johnson's Maine closet, there are still items Astor insisted she take, including a dress Astor "hauled out" for her to wear when she announced that she was getting married in 2000.

Employees stayed with Astor for years, until her son reportedly fired most all of them. But the loyalty of Steve Hamor and his two sons stands out. Hamor, 65, was her groundskeeper in Maine for 42 years.

Hamor's son Scott, who with his brother also would grow up to work on the grounds, spent his childhood running around the estate as if it was his own playground.

As a teen, he remembered "Mrs. A" beckoning him from mowing a lawn to say hello and introduce him to Barbara Walters.

Astor wanted to send him and his brother to university. They refused. But when Scott found himself in his mid-20s, going through a divorce and with custody of two boys, he accepted her assistance -- and insistence -- in helping him settle into a new apartment.

"She was always wanting to know how you were doing and what she could do for you," said Scott, 42, who now works on Maine property owned by David Rockefeller.

Concern that not enough was being done for her is what drove Philip Marshall, defendant Tony Marshall's son, to file a petition for guardianship for his grandmother in 2006, alleging, in the words of his lawyer, "elder abuse" by his father. The intention was nothing more than to ensure that she was cared for, removing control by his father and transferring care to Astor's dear friend Annette de la Renta.

Though he wouldn't discuss the details that prompted his actions -- "I won't survive this conversation if I do," he said -- the successful petition mentioned her sleeping in torn nightgowns on a urine-stained couch and eating bland leftovers.

"To the rest of the world, she was Brooke Astor. To us, she was our grandmother," said Marshall, 55, who grew up in Vermont with his twin brother, Alec, and was not "of the New York world."

The practicing Tibetan Buddhist, who is a professor of historic preservation at Roger Williams University in Rhode Island, never anticipated the findings that led to his father's indictment and said he merely wanted to "provide my grandmother with the care, comfort and dignity she deserved."