(CNN) -- For three years, the thieves crept into some of the poshest homes in the most exclusive enclaves in the nation. 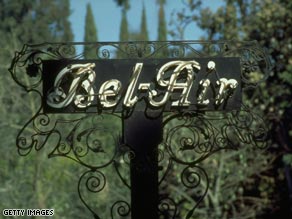 The gated community of Bel Air was one of several enclaves targeted by the so-called "Hillside Burglars."

Police said they finally have a break in the case, and wealthy residents of Los Angeles, California, are breathing a sigh of relief.

"These guys were real good," said L.A. City Councilman Jack Weiss, who oversees Bel Air where some of the burglaries were committed. "They were professionals."

The thieves hauled away more than $10 million worth of valuables and cash from 150 homes in upscale neighborhoods such as Bel Air, Pacific Palisades and Beverly Hills, police said.

"It's a very euphoric, satisfying feeling that we got this person," said the police Lt. David McGill. "It's a very frustrating feeling to tell the victims, 'I'm sorry I don't have any news for you.' Finally when we got some good detective work and breaks, things started lining up."

Police are looking for more suspects linked to the three-year spree but are not naming them.

Thomas is being held on $2 million bail, according to the L.A. County District Attorney's Office. He is likely to stay in custody because he must reveal the origin of any funds used to pay the bail, authorities said.

At a court appearance Tuesday, Thomas pleaded not guilty to two charges of residential burglary, one in January 2006 and another in March 2008. The preliminary court date for Thomas will be set on January 29 and additional charges are expected to be filed, according to CNN affiliates KABC and KTLA.

Police will not comment on Thomas' background. The Los Angeles Times reported that Thomas told police he had been working as an auto broker.

The Hillside Burglars have not struck since Thomas' arrest, police said.

"Hallelujah!" said L.A. Councilman Bill Rosendahl, whose district includes Brentwood and Pacific Palisades. "Even a crafty crook does make his mistake and that's what happened to this one."

Some residents are cautiously optimistic.

"We're delighted," said Robert René, president of Brentwood Homeowners Association, which represents about 800 homes. "We are very fortunate to have the due diligence of the Westside LAPD."

Harvey I. Saferstein, president of the Bel Air Association, agreed, "We are all obviously thankful and relieved."

The financially strapped LAPD created a Hillside Burglars task force. People donated cameras and other equipment and police stepped up patrols. The outlay amounted to "millions of dollars," Rosendahl said.

Neighborhood watch groups formed. One in Bel Air donated $8,000 for infrared cameras that can spot burglars in the dark.

Robert Ringler, president of the Bel Air Beverly Crest Neighborhood Council, hosted a community meeting with the LAPD at the five-star Bel Air Hotel a year and a half ago. As swans swam in ponds in the background, about 150 Westside residents sipped Perrier and vented their fears.

"It had gotten to be such an epidemic," Ringler said.

The impressive mansions -- usually gated and hidden by walls and hedges -- dot the lush hillsides and canyons between the coast and the mountains. The qualities that make them so desirable also make them vulnerable.

The seclusion that appeals to upscale homeowners also appeals to thieves. Because many of the homes are tucked into the sides of mountains and canyons, behind gates, it's easy for a thief to escape unseen and hard for police to get there quickly.

"It's the perfect target," Ringler said. "You can access the property and nobody would ever see you."

Frequently, maids, pool workers and gardeners have access to the property, which allows burglars to pass as the help and slip in unchallenged.

According to police and media reports, the methods were sophisticated.

Burglars waited till homeowners went on vacation or out for the night. They used lawn furniture and ladders to creep into the second floor, which often lacked alarms. They quickly went in, looked for jewelry, safes and cash, and ducked out with the goods.

They never attacked any of the homeowners, preferring stealth to confrontation.

Residents say they learned to keep jewelry and other valuables in safety deposit boxes and out of sight. Many added alarm systems and insured their belongings.

"It's not just about money," said Robin Stevens, who lives with her husband and son in Brentwood. "A lot of people lost things of sentimental value."

Stevens, whose neighbors have been burglarized, said she feels safer knowing that police arrested Thomas, but will continue hiding her mother's antique jewelry and locking the windows.

During a two-week trip to the South Pacific last fall, Stevens made sure to e-mail her neighbors, notifying them that she would be gone so they could look out for strangers.

Pacific Palisades Community Council Chairman Richard G. Cohen said he feels relief but is waiting for a conviction. "The arrest doesn't mark the end of our concern," he said.

With the economy in a tailspin, Steve Twining, who serves on the West Los Angeles Police advisory board, believes thefts will continue.

"In these dire economic times, I don't think it's going to dissuade others from trying to do the same thing," he said. "The burglary situation will probably get worse before it gets better."