(CNN) -- A California man sold his 14-year-old daughter to an 18-year-old man for cash, beer and meat -- then called police when the prospective bridegroom didn't live up to his end of the deal, authorities said Tuesday. 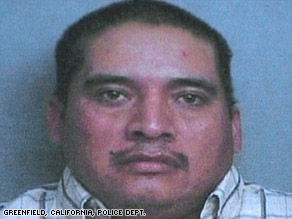 Marcelino de Jesus Martinez, 36, of Greenfield, California, was arrested Monday and booked into the Monterey County Jail, Greenfield police said in a statement. He faces felony charges of receiving money for causing a person to cohabitate, police said.

Martinez had arranged through a third party to have his daughter marry the older teenager, identified by authorities as Margarito de Jesus Galindo, of Gonzales, California. In exchange, Galindo was to pay Martinez $16,000 and provide him with 160 cases of beer, 100 cases of soda, 50 cases of Gatorade, two cases of wine, and six cases of meat, Greenfield Police Chief Joe Grebmeier told CNN.

All those involved in the case are from the western Mexican state of Oaxaca, the police chief said. In the Oaxacan community, such an agreement is "normal and honorable," he said. "In California, it's against the law."

Watch for a list of the groceries dad reportedly wanted »

In Oaxacan culture, the food and beverages are provided by a prospective bridegroom for the wedding, Grebmeier said.

Authorities believe the young girl went with Galindo willingly, and no coercion was involved, he said. However, the girl is four years younger than California's age of consent, although the law does allow 16-year-olds to marry with parental consent.

"The 14-year-old juvenile moved in with Galindo and when payments were not received, the father, Martinez, called Greenfield PD to bring back the daughter," according to a written police statement.

The girl was reported as a runaway juvenile on December 18, Grebmeier said, and police took a missing-persons report and put out a flier.

But "as we investigated, it started to develop into something that may not have been a runaway," he said, and police began to believe Martinez wanted them to bring back his daughter, since he had received no payment.

On January 2, Galindo and the girl returned from a trip to Soledad, a town a few miles north of Greenfield, and were interviewed. Police learned the couple had never married, but had engaged in sexual relations, Grebmeier said.

Galindo and Martinez were neighbors at an apartment complex and were apparently from the same area in Mexico, the police chief said. A third party was brokering the marriage deal, he said, and is cooperating with authorities. But the young couple apparently left for Soledad before the negotiations were complete.

Galindo was cited for statutory rape and released, Grebmeier said. The girl was returned to her family, he said, as authorities believe she is in no danger. However, police reported the case to child protection officials.

The Greenfield area has had a large influx of Oaxacans. A presentation on understanding Oaxacan culture is posted on the Greenfield police Web site.

"Arranged marriages are common in several cultures, and this is not an issue among consenting adults over the age of 18," police said in the statement. "But California has several laws regarding minors, the age of consent and human trafficking."

He said he wanted to send a message to immigrant communities that such behavior is unacceptable. He said his department has long heard rumors of children as young as 12 being sold or offered for sale. The Greenfield police statement said arranged marriages between young girls and older men "have become a local problem."

Greenfield is about 140 miles southeast of San Francisco.

All About Mexico • Marriage