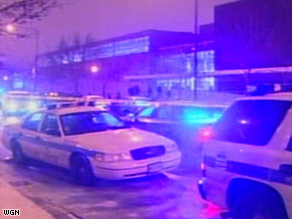 Police say a shooting outside a Chicago high school on Friday may be gang-related.

Authorities said the shooting occurred about 8 p.m. CT outside Dunbar High School on Chicago's South Side.

"It appears to be gang-related," Chicago Police Superintendent Jody Weis said at a news conference, adding that more than 200 officers were investigating the incident.

"We anticipate solving this thing in the not too distant future," Weis said.

Chicago Fire Department spokeswoman Eve Rodriguez said the five people -- all males -- were wounded by gunfire and taken to area hospitals. Two were in serious condition, one was in critical condition and two were in stable condition, she said.

Rodriguez also said a female victim was injured in a fall and was listed in good condition at a hospital. Rodriguez told CNN affiliate WGN that all of the victims were "young people," but she could not say whether they were students.

WGN reported that a basketball game was in double overtime at the school when shots were fired outside the building.

Basketball games had been underway at the school for about four hours, and some students were leaving the building when gunfire broke out, WGN reported.

Shaneisha Turman, 15, told WGN that she was standing in the doorway of the gym when she saw a silver truck pull up to a nearby bus stop.

The occupants of the truck pretended to shoot, Turman said, and then "they really started shooting."

People were shouting "They're shooting," Turman said, adding, "It was a lot of people shouting and running."

Weis said security cameras at the school were being examined to aid in the investigation and while no arrests had been made, "We've got some positive leads."