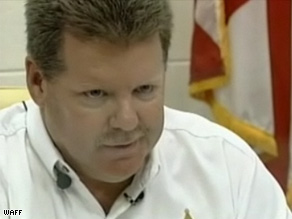 Sheriff Greg Bartlett is now pledging to see that all state and federal food funds are used to feed prisoners.

After a Wednesday hearing, Clemon found Bartlett in contempt of court, saying he had failed to comply with a consent decree in the 2001 lawsuit regarding conditions at the Morgan County Jail, according to documents filed in the case.

Clemon ordered Bartlett released from the federal Talladega Correctional Facility the following day after the sheriff's attorneys pledged to provide better and healthier meals to inmates.

At issue is an Alabama law that attorneys for the inmates claim provides sheriffs with an incentive to skimp on feeding inmates. Under the law, sheriffs are permitted to keep -- as personal income -- money left over after purchasing food for inmates.

The state provides sheriffs with $1.75 per day per inmate for food, according to the Alabama Attorney General's Office. However, in a March 2008 opinion, the office affirmed that sheriffs may legally keep what is left over.

"There is no minimum amount of money that the Sheriff must spend on food," said court documents filed by Melanie Velez, an attorney with the Southern Center for Human Rights, representing the inmates. "Statutory permission to pocket the state's food subsidy does not, however, make it acceptable for the Sheriff to provide less than an adequate amount of food to detainees at the jail."

But in a statement issued Friday, Bartlett called coverage of the case misleading.

"The Morgan County Jail served over 328,000 meals in 2008 and only received 15 complaints on the issue of food," he said. "I have never or would not ever have tolerated an inmate being fed inadequate portions or meals for any reason. That never happened, to my knowledge."

A consent decree filed in September 2001 with the court required Bartlett to serve "a nutritionally adequate diet" to inmates.

However, Clemon wrote in court documents that a typical breakfast for county inmates was a serving of grits or unsweetened oatmeal; half an egg or less, sometimes cold; a slice of white bread; and unsweetened tea or a beverage such as Kool-Aid.

Lunch was either two peanut butter or bologna sandwiches, "with a small amount of peanut butter or an exceedingly thin" slice of bologna between two slices of white bread; a small bag of corn chips; and flavored water or unsweetened tea.

A typical dinner was two hot dogs or meat patties; a slice of bread; and mixed vegetables or baked beans, the judge wrote.

At times, when chicken was served, it was undercooked and pink, Clemon said. Salt, pepper, sugar or other condiments were not provided; they must be purchased by inmates at the jail store.

The portions, Clemon wrote, are "woefully insufficient to satisfy the normal appetites of adult males. After eating each meal served by the Jail staff, the inmates remain hungry. Some inmates complain of recurring hunger pains." Many inmates have lost weight, he said, some of them as much as 50 pounds.

Inmates complain that they get enough food only by buying more at the jail store, the judge said, noting that some have spent as much as $100 there.

In 2007, the judge said, Bartlett and the sheriff of a neighboring county both paid $500 for half a tractor-trailer full of hot dogs. "They were served to the inmates at each meal until they had been depleted," Clemon wrote. Other inmate food was donated in bulk by schools and other locations, and the sheriff did not pay for it, the judge said.

Meanwhile, since he took office in 2003, "Sheriff Bartlett has deposited in excess of $200,000 to his personal account from the funds allocated to him by the State of Alabama and the federal government for the feeding of inmates," Clemon wrote. Last year, Bartlett made $95,000, the judge said.

"Sheriff Bartlett admits that he could double the food portions served to inmates of the Morgan County jail without significantly increasing his food expenditures," Clemon wrote.

"The court finds by clear and convincing evidence that Sheriff Greg Bartlett has converted to his personal use and benefit state and federal funds allocated for the feeding" of prisoners.

In an order filed Friday, Clemon noted that the sheriff, through his attorney, has pledged to use all state and federal funds for feeding inmates in the future, and that "fresh fruit, fresh milk, vegetables and whole grains will be a regular part of the monthly menu."

Daily meals will follow the USDA's Food Guide Pyramid, Clemon said, and condiments will be provided.

In a similar case in south Alabama, Mobile County Sheriff Jack Tillman pleaded guilty to two misdemeanors, perjury and an ethics offense, and resigned in 2006, agreeing to repay some of the $13,000 he shifted from a jail "food fund" to his personal retirement account, according to the Mobile newspaper Lagniappe.