(CNN) -- Pharmaceuticals giants Merck and Schering-Plough are planning to merge their operations under the name Merck in a deal worth $41.1 billion. 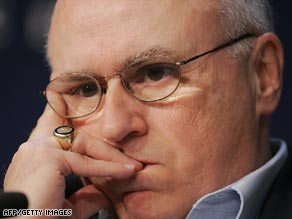 "We are creating a strong, global healthcare leader built for sustainable growth and success," Clark said in a media statement Monday. "The combined company will benefit from a formidable research and development pipeline, a significantly broader portfolio of medicines and an expanded presence in key international markets, particularly in high-growth emerging markets.

"We look forward to joining forces with an outstanding partner we know well and that shares our commitment to patients, employees and the communities where we work and live."

Merck added that its 2009 outlook has not changed, and it is committed to keeping its annual dividend at its current level of $1.52 per share.

Both drug-makers reported better-than-expected quarterly results in early February, but announced steep job cuts. On a conference call with investors on February 3, Clark said the drug-maker was open to a takeover of a large pharmaceutical company.