LONDON, England (CNN) -- The ever budget-conscious boss of Ryanair has suggested the discount airline may start charging passengers for using the toilet on board its flights. 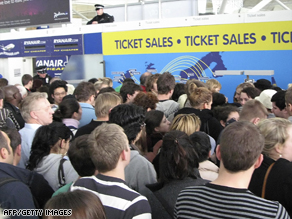 Whatever you do, don't drink too much before your flight. Ryanair's investigating onboard fees for flushing.

Michael O'Leary said the airline had revived inquiries into whether the airline could install coin-operated toilets on its fleet.

"People might actually have to spend a pound to spend a penny in future," he said in a BBC interview, adding "We're always in Ryanair looking at the ways of constantly lowering the costs of air travel and making it more affordable and easier for passengers to fly with us."

Asked by the incredulous presenter what passengers would do if they found themselves without money mid-flight, O'Leary replied: "I don't think there is anybody in history that has got on board a Ryanair aircraft with less than a pound." Sound Off: Is it fair to charge a fee for a flush?

The Irish airline is renowned for its cheap flights and regularly advertises competition-crushing deals to boost capacity on its short-haul routes.

The company has made no secret of its quest to boost revenue by any means possible. It already charges for food and each bag checked into the hold is subject to a fee.

Last week Ryanair announced plans to remove all its check-in counters in an effort to encourage travelers to take just one piece of hand-luggage.

Ryanair's latest revenue-raising proposal has surprised few in the industry who are accustomed to its method of business.

"It seems Ryanair is prepared to plumb any depth to make a fast buck and, once again, is putting profit before the comfort of its customer," said Rochelle Turner, Head of Research at Which? Holiday.

The consumer group also warned that move might hit Ryanair where it hurts.

"Charging people to go to the toilet might result in fewer people buying overpriced drinks on board, though -- that would serve Ryanair right," Turner said.