(CNN) -- The U.S. diplomatic courtship with Iraq in the 1980s continued despite Saddam Hussein's use of chemical weapons. Click on the links to read once-classified documents from the Reagan administration. 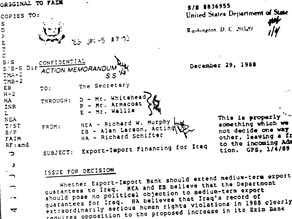 Once-classified documents show the U.S. continued its courtship with Iraq despite use of chemical weapons.

Date: December 29, 1988
Subject: Export-Import Financing for Iraq
Summary: In the closing days of the Reagan administration, the State Department's top human rights official argues that continued financial aid to Iraq "can simply not be squared with our worldwide human rights policy." However, Assistant Secretary of State Richard Murphy counters that U.S. financial ties with Iraq have "far greater use with Baghdad as a carrot than as a stick." A year and a half later, Iraq invades Kuwait. Read the document (pdf)