(CNN) -- Iraqi leaders met Tuesday to review a draft of an agreement on the future of U.S. troops in Iraq, a senior adviser to Prime Minister Nuri al-Maliki said. 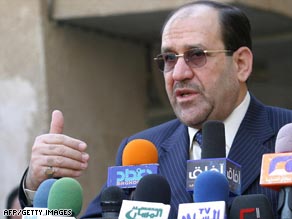 A senior Bush administration official said the text calls for U.S. troops to leave Iraqi cities, cease street patrols and return to their bases by June, unless Iraqis request their support.

The agreement also calls for U.S. troops to leave Iraq by the end of 2011, the senior official said on condition of anonymity because of the sensitivity of the discussions.

The official said that the Iraqis could ask U.S. troops to stay beyond 2011 depending on conditions on the ground but that the Iraqis would have "sole discretion" as to whether troops remain.

But the U.S. official said that the draft was final and that negotiations on the Status of Forces Agreement had finished.

With the United Nations mandate authorizing the U.S. troop presence in Iraq expiring December 31, U.S. officials are examining "contingencies" in case the Iraqi government is unable to sell the deal to the country's various factions, the U.S. official said.

One issue that had held up negotiations was whether U.S. troops will remain immune from Iraqi law. The U.S. official said negotiators had "reached a compromise" on the issue, but details of the immunity compromise weren't available.

Baghdad has sought the authority to arrest and try Americans accused of crimes unrelated to official military operations. It also wants jurisdiction over troops and contractors who commit grave mistakes in the course of their duties.

Over the weekend, Iraqi Foreign Minister Hoshyar Zebari said he thought the draft's language concerning the immunity issue "could be supported by Iraqi leaders."

"I think both sides offered whatever they have, so I think now we have a text that is reasonable," Zebari said.

Majid said al-Maliki will show the draft Wednesday to the Political Council for National Security, a body that includes al-Maliki, Talabani, the two vice presidents, leaders of political blocs and the parliament speaker.

If Iraq's various executive councils and parliament do not approve the deal, fallback options include "a new U.N. Security Council resolution legally authorizing the extension of the U.S. footprint" or an "informal agreement between the United States and the Iraqis," the U.S. official said.

The official said that there is a general consensus within the Bush administration on the draft and that Congress expects to be briefed on the draft "soon."