CNN International anchor Michael Holmes has reported from numerous hotspots around the world, including several stints in Iraq. Here he analyzes claims about the U.S. troops surge in Iraq and its possible effect in Afghanistan.

(CNN) -- When it comes to getting a political message -- or perception -- across to voters, the rule is usually to keep that message simple, and say it often. 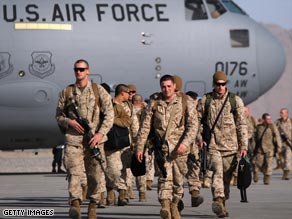 U.S. Marines arrive this year in Kandahar, Afghanistan, where analysts say many more troops are needed.

One of the oft-repeated themes in this presidential campaign (including during Thursday's vice presidential debate) is that the troop surge in Iraq worked, and it should/could/will work in Afghanistan.

This ignores some pretty stark realities on the ground in both countries.

The reduction in violence in Iraq has come about because of more than one action -- and that reduction, as military leaders freely admit, is exceedingly fragile.

With General David Petraeus at the helm, the entire strategy of dealing with the insurgency changed.

Troops were moved out of their high security bases and into the communities, via Joint Security Stations (JSSs) or COPS (Combat Outposts).

This made reaction time much faster, and gave a permanent presence within trouble zones, making it tougher for the insurgents to operate as freely as they had before.

The military also engaged tribal leaders in a way they hadn't before.

Then there was the birth of the so-called Sons of Iraq -- essentially the U.S. paying tens of thousands of former Sunni insurgents to stop shooting at the Americans, and shoot at al Qaeda instead.

That's made a massive difference -- but the money will stop; the Shiite-led government doesn't like -- and even fears -- the former insurgents; there aren't enough jobs in the security forces to absorb them all, and, anyway, these guys aren't likely to go work in a clothing store for a living.

Another factor was the walling off of entire neighborhoods to prevent sectarian killings -- carving up the capital into a series of cantons. Sure, it slowed the blood flow, but the damage done to the fabric of a once vibrant and generally cooperative population is likely to be stark when those walls come down, or the Americans leave.

Now, to the other question: Would a "surge," or similar tactics used in Iraq, work in Afghanistan?

The short answer is no, and it's naïve to assume it could, or would.

For a start, Iraq's war is Iraq-based (notwithstanding Iran's heavy involvement). Afghanistan's war very much involves Pakistan, which complicates matters considerably. Not only is the West trying to stop terrorists from once again using Afghanistan as a base, there's the very real risk that those same groups could stoke the fires of extremism in Pakistan to the point of conflagration.

Iraq's is a largely urban based conflict, requiring different tactics, strategy and manpower and equipment than would be the case in Afghanistan

For geographical reasons alone, not to mention infrastructure and tribal differences between the Iraq and Afghanistan situations, many believe a "surge" would require many thousands more troops than are planned. There simply isn't the manpower or equipment to do that.

Afghanistan's war is also ideological (Taliban, al Qaeda et al), not sectarian-based, as Iraq's conflict largely is. This means those who currently support the Taliban because it happens to suit them could be persuaded otherwise -- a deal with warlords is always possible in a place like Afghanistan.

And anyway, Afghanistan does have an army whose troops can work together (unlike the Shia/Sunni divide and mistrust that exists in Iraq's security forces to this day). With the right money, and training, Afghanistan's indigenous military could get the job done.