Family of U.S. soldier in dark about 'non-hostile' death

BAGHDAD, Iraq (CNN) -- Darryl Mathis waits in his Pensacola, Florida, home for the body of his 24-year-old son to return home from Iraq. Mathis, a military veteran himself, was seething with anger Thursday as he spoke about the death of Army Staff Sgt. Darris J. Dawson. 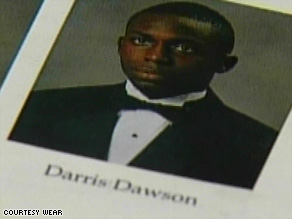 Dawson and Sgt. Wesley Durbin, 26, are said to have been shot and killed by another U.S. soldier on Sunday at a base south of Baghdad.

Darryl and his wife, Maxine (Dawson's stepmother), say the military has told them nothing about the incident: no details on his death, no information at all.

His voice shakes as he says he believes that the military has let him down.

"I'm very disappointed -- very," he said. "If I would get a straight answer, if they would actually tell me what's going on, I would have something to work on; but right now, I have nothing to work on. Everything I'm getting, I'm getting from the media."

On Saturday, the military said in a statement that "the commanding general of the two soldiers killed Sunday have spoken to the two families and have given them all the information currently available."

Darryl Mathis said Friday that he may consider hiring a lawyer, so he can "get to the bottom of this."

His wife sobs as she says her stepson's death was foreshadowed by a phone call he made to her from Iraq.

"He said that he was more shaky sometimes of the soldiers than of the enemy, because of the young guys over there."

She said she asked him, "What in the world do you mean? You're afraid of your own soldiers?"

" 'These kids are trying to fight a war they know nothing about. ... They're jumpy. ... They're more scary than the enemy,' " she said he told her.

Since learning about the her stepson's death, Maxine Mathis said, she has forgiven the shooter "with all of [her] heart."

She said she knows that he and his family too must be suffering and hopes to meet him when he's ready so she can "just ask 'Why?' "

On any given day, CNN receives dozens of detailed news releases from the U.S. military, including those announcing U.S. military casualties. In the cases of Dawson and Durbin, there was no mention of their names, and the releases were terse.

"A multi-national division center soldier died this morning of non-combat related causes," the first release read. "The cause of death is under investigation."

A second release came later in the day.

"A second multi-national division center soldier died this morning of non-combat related causes. The solider died of wounds September 14 at a coalition forces combat Army support hospital," it read. "The incident is under investigation."

Inquiries Thursday from CNN were met with a news release that a press officer said had been drafted Wednesday. However, the release uncharacteristically had not been e-mailed out to reporters that day.

After naming the two soldiers and giving their rank and unit, it reads, "A U.S. soldier is in custody in connection with the shooting deaths. He is being held in custody pending review by a military magistrate. The incident continues under investigation." The release gives no other details.

The U.S. military is classifying Dawson's death as "non-hostile," something his father finds puzzling.

"I don't know. I really don't know," he said. "I just can't get it together with that. I had never heard that before. 'Non-hostile' in a war zone?"

Lt. Col. Paul Swiergosz is a public affairs officer for the area in Iraq where the incident took place. He says the "non-hostile" death classification was given "because the deaths were not the result of hostile enemy action."

But details on what happened remain scarce.

CNN phoned an Army base in Fort Stewart, Georgia, to ask for more details on the incident. CNN was then e-mailed another press release -- this one written by Gen. Tony Cucolo, the commanding general of the Third Infantry Division -- that a press officer said had been drafted Wednesday.

That release also had not been e-mailed to reporters, as is customary.

"We do know one soldier, a fellow noncommissioned officer, allegedly opened fire and mortally wounded his squad leader and fellow team leader," reads the statement.

A spokesman at Fort Stewart said, "A soldier has been taken into custody. The incident is under investigation, and that is all I can say."

The spokesman would not even confirm information in his commanding general's press statement.

Maxine Mathis says she is stunned at how her stepson's death has been handled by the military. She says the Army assigned someone to help the family with anything they needed once they found out Darris had been killed, but she and her husband don't know how he died.

She said her husband asked the liaison officer whether it was true that Darris had been killed by another U.S. solider. She said the officer denied it, insisting that he didn't know anything else.

Darryl Mathis continues to express his disappointment in the lack of information from the military about his son, amid rumors that his son's body could be home by Saturday.

Bobby Muller, president of Veterans for America, said he thinks the way the military classifies deaths in Iraq is an attempt to keep the public combat numbers down.

"There is a clear and longstanding record, regarding the classification of causalities in Iraq, to minimize combat losses. And we're seeing people wounded and killed that would have well been considered casualties from hostile action in previous conflicts. It's an attempt to conceal the actual cost of this war in terms of casualties," Muller said.

"The Department of Defense has announced the death of every service member who has given their life in operation Iraqi and Enduring Freedom," said a Pentagon spokesman, Col. Gary Keck. "We have been open and transparent on the numbers of casualties suffered in these operations."

Mathis says his son wanted to come home to his wife and four young children and was in the process of applying for a transfer.

"Last I spoke to him was last week Monday. He called every Monday and said he was checking his paperwork. He said he was going to call me back once he found out. That was the last I heard from him."

With all of the differing stories being told and the lack of information, Darryl Mathis said, he just "can't believe anything."

"[We] just want answers, just want the truth," he said.

All About War and Conflict • Iraq War • Baghdad • The Pentagon