For some, Ramadan means fasting, cleansing and TV drama

(CNN) -- Ramadan is the holiest month for Muslims around the world, a time to fast, cleanse the soul and surrender to God. But in the Middle East, there's a new twist to the tradition. 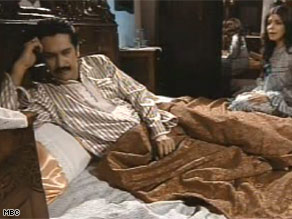 Ramadan translates into big bucks for Arab satellite channels. Millions of dollars are spent on special programming, much of it comparable to Western soap operas, to entertain the masses during their sunrise-to-sunset fasts.

One program, the popular Syrian production "Baab El-Hara" -- "The Neighborhood Gate" -- offers high drama focused on a family feud. A man and his pregnant wife are separated as their mothers fight it out, with each mother-in-law trying to teach the other a lesson.

The woman misses her husband and wants to go back to him. The husband kisses his mother's hand and promises her he'll do only what she wants.

The soaps showcase social traditions mixed with melodramatic characters and enough twists and turns of events to last the entire month of fasting.

But it's not all soap. There are also history programs highlighting glorious times of Islamic and Arabic bygone eras. On these, the ancient Arabic tribal costumes are showcased, complete with the traditional headdress, dagger on the side and more camels than a viewer can count.

Watch a report on Ramadan television »

The soap opera boom during Ramadan has become the subject of hot debate on news channels. Some people have expressed concern that sitting in front of a TV set all day doesn't go well with the spirit of the month, when Muslims are supposed to be contemplating and meditating.

The Dubai-based news channel Al-Arabiya found a novel way to entertain its viewers: a documentary in which the host walks in the footsteps of the prophet Mohammed as detailed in the Quran.

The channel also offers a daily lighter look at Ramadan, focusing on people's health during the holy month. Recommendations on the best meals to eat are followed by descriptions of how many calories they contain. Middle Eastern cuisine is displayed to viewers just in time to break fast. That, too, is announced on TV these days, instead of the traditional cannon and call to prayer.

And if Muslims decide to break their fasts with a traditional shisha smoke and a light meal in a neighborhood cafe, no worries. Satellite channels will serve them soaps there, too.

It's all part of the big plan, and it happens only during Ramadan.